I've never much liked public prayer, other than in church (and similar intentional gatherings).

When I was growing up, the Lord's Prayer was still said at the start of the school day. In elementary school, the whole class had to say it together, so entire generations grew up being able to recite it (along with the words to O Canada) forwards, backwards, sideways and in their sleep (the last being pretty close to the state most of were in while performing this morning ritual). As the child of agnostics, I went through the motions. My parents could have had me excused, but for some reason did not.

In high school the Prayer was read over the PA system, and we no longer had to recite it. Also about that time, I became a fundamentalist Christian.

And I still didn't like starting the school day with the Lord's Prayer, for a number of reasons. For one thing, I knew that many of my classmates weren't Christians (OK, some of this was according to the fundamentalist conceit that they are the only Real Christians -- but lots of them really weren't Christian, even by non-bigoted definitions). I thought it was stupid to expect people to stand up for some ritual they found meaningless. For that matter, even I found the whole thing pretty meaningless. I was perfectly capable of praying my own prayers on my own schedule, thank you very much, and hearing the same prayer at the same time -- sandwiched between the bustle of coat-removal and the taking of attendance -- really didn't do it for me. To me, sincere faith and authentic expression thereof were what was important, and enforced group participation in a perfunctory rote observance was a travesty.

Now as an atheist, I consider this sort of thing at best an irrelevant waste of time, and at worst an improper intrusion of a particular religion into our common public life. Which brings us to.... 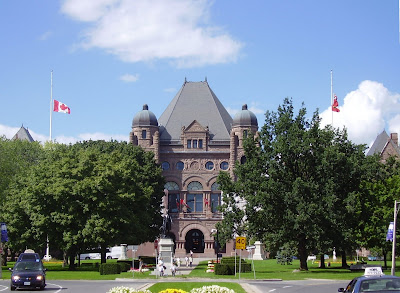 ....the Ontario Legislature where, ever since 1969, each day's sitting has opened with the Lord's Prayer. However, current Premier Dalton McGuinty proposes changing that custom, and has asked for an all-party committee to study ways of becoming more inclusive. Said McGuinty:

There are, of course, some detractors:

NDP House Leader Peter Kormos agreed with the idea of an all-party committee reviewing the use of the Lord's Prayer, but warned Mr. McGuinty that he may face pressure to drop prayers altogether.

“The Premier is trying to show how pluralistic that he's prepared to be when it comes to faith communities,” Mr. Kormos said.

“But I think he'd better be careful because there are going to be folks from the humanist perspective who are going to argue that if you open that box, then let's not have any prayer at all.”

Gosh, Peter: you say that like it would be a Bad Thing. And the humanists might have opinions on it! Hide the children! And I'd always thought the NDP was progressive -- silly me. Anyways, I've got bad news for him -- the nasssty humanists didn't wait for Dalton to "open that box" before commencing their War On Ceremonial Prayer.

Is Kormos (who, according to Wikipedia, is an Eastern-Rite Catholic) cool with Baptist, Jewish, Hindu, Buddhist, First Nation and Muslim prayers? How about Wiccan? They're all about equally not his religion. Does he really prefer to participate in other people's prayers than none at all?

As I see it, there are only two ways to resolve this in a way that doesn't leave the government implicitly endorsing and/or denigrating somebody's religious views. Either:
I have some preference for #1, but could live with #2.

And who knows? The MPPs might even like hearing something different every day, instead of the same old same old.
Posted by Eamon Knight at 9:23 PM 3 comments: 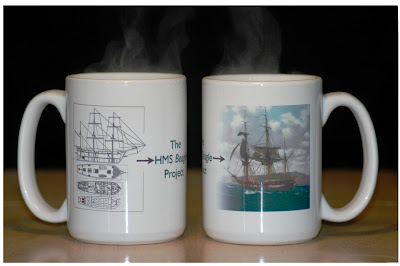 Seriously: wouldn't you love to have one of these Beagle Project mugs, standing on your kitchen table, full of your morning dose of chai or java? You know you would! And your purchase of one (or several!) will help build and launch the replica HMS Beagle, which is to sail around the world in 2009, to mark the Darwin bicentenary. And she's not just a museum ship: the Beagle crew will include working scientists, carrying on research in the on-board labs.

The fundraising merchandise has more than mugs! Won't you (or your SO) look totally HAWT (in a geek sort of way -- but that's the best kind, right?) in one of these Beagle Project T-shirts? 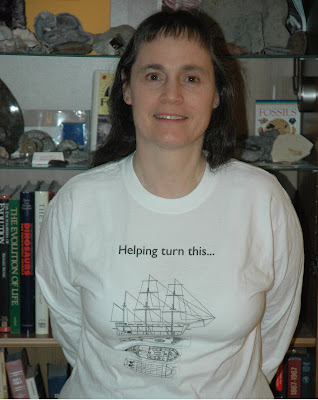 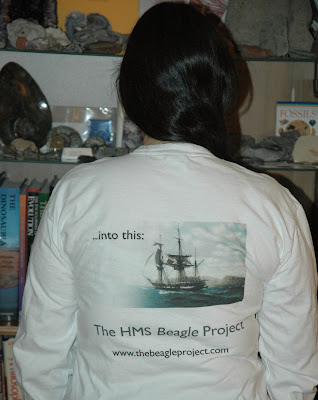 PZ Myers is so gonna want one 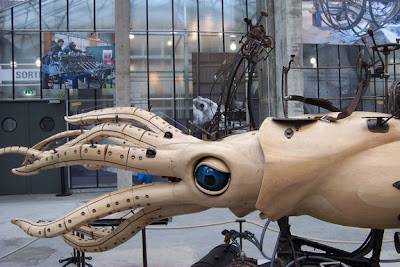 This is just one of the mobile sculptures at Les Machines de L'Ile, a unique gallery of mechanized sculptures in Nantes, France. Others include a 45-tonne mobile steel elephant, on which visitors can ride -- which reminds me of a Jules Verne novel I once read (OK, I confess: I only had the Classics Comics version).

Hat tip and photo credit to Adina at Point of Discontinuity.
Posted by Eamon Knight at 8:46 PM 1 comment: