Readers of talk.origins may have run across a poster called Richard Forrest, a British palaeontologist specializing in plesiosaurs, and also author of a hilariously, um, revisionist history of evolutionary science.

Now you can see the man himself, enthusing over the skull of a monster pliosaur recently discovered in Dorset.
Posted by Eamon Knight at 6:57 PM No comments:

I learned a new word yesterday: "yotta". Strictly speaking, it's not a word; it's the SI prefix indicating 10 rasied to the power of 24 (abbr: "Y"). That's a thousand times bigger than the largest SI prefix I previously knew about (zeta), and is currently the largest official prefix. Really, it's a useful unit to have. For example, the power output of the Sun is 383YW. By comparison, the province of Ontario consumes about 25GW on a hot day when everyone is running their air conditioners. Which means the Sun is equivalent to about 15 peta-Ontarios.

Borderline-Asperger geeks like to know these things. We'd be loads of fun at cocktail parties, except we never go to any because we hate people. (That, and no one ever invites us more than once. I don't care; you're all boring. Yes, all of you.)

The way I found this out is weird: it seems that, in what has to be 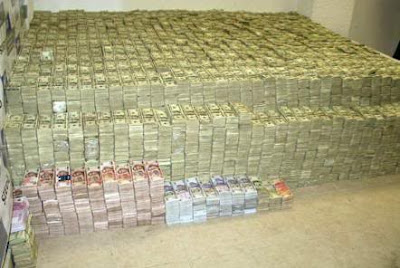 the record-holder for ridiculous damages claims, someone is suing the Bank of America for 1784 billion trillion dollars. Yes, that's 1.784 yotta-bux.

That's a lotta bux (as in: waaaay more than are in the picture at right).

OK, just to raise the intelligence quotient of this post above of the yocto-level, here's Monty Python's Money Song. Enjoy:

Posted by Eamon Knight at 11:11 PM No comments:

Labels: news of the wierd, science

A Day of Two Books

So, I'm on the bus this morning, reading Dawkins' The Greatest Show on Earth, and he spends a couple of pages explaining how, before Darwin, everyone thought species had essences; they were natural kinds, which of course makes it very hard to imagine how one species could turn into another. But Darwin showed us how to think of species in terms of populations containing lots of variation, and the average of the distribution can shift over time until it's so different we no longer call it the same species. This narrative about how the idea of "species" changed (as opposed to the species themselves changing, if you get my meaning -- like, I'm talking in a meta-level here...oh, never mind), Dawkins credits to biologist Ernst Mayr, who explained it all to us back in the 1950s.

Then the bus gets to work, and I spend a few hours doing workish things.

And when I return home this evening, there is awaiting me a padded envelope which opens to reveal this book: 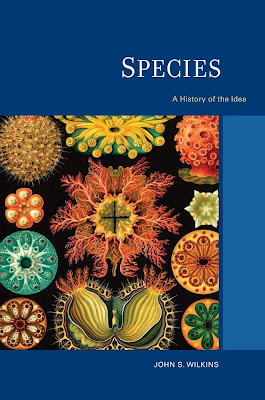 And of course John wastes no time (as in: right in the Prologue, before we even get to Chapter The First) telling us that Mayr got it all wrong, in fact the whole book is about how wrong he was, almost no one was an essentialist, ever.

It's fun when that kind of thing happens.
Posted by Eamon Knight at 10:40 PM 1 comment:

Labels: books, evolution
Newer Posts Older Posts Home
Subscribe to: Posts (Atom)
[Freethinkers are] a motley mob of deists, agnostics, secular humanists, pantheists, atheists, and who knows what else, and organizing seems to be against our nature. We have to resist that; we have to be willing to work together while recognizing the diversity of perspectives under the umbrella of freethought, and treat that variety as a strength rather than a weakness.
--P.Z Myers