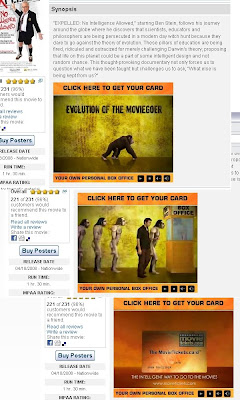 For those who can't see the animation (and for after it has disappeared), here's a composite of three screen-caps that give the gist. The caption in the last one reads: "The intelligent way to go the movies". I really can't help wondering if they did that deliberately.

BTW, we just got back from Indiana Jones: The Kingdom of the Crystal Skull -- a fun romp and worthy successor to the earlier ones. And it's every bit as good a documentary as Expelled!
Posted by Eamon Knight at 11:17 PM No comments:

Due to overwhelming popular demand (ie. one commenter, and email from some Christian friends), after what I realize has been a whole year, I now pick up the continuing saga where I left off.

Looking back on my whole Christian phase (a total of 28 years and a few months), I see a process of continuously discarding bits and pieces of an initially-adopted fundamentalist orthodoxy. I am constitutionally incapable of not asking questions, both about the external world and the contents of my own head -- and that is absolutely fatal to any sort of rigid dogmatism. My constant questioning is what led me from the naive agnosticism of my childhood (anything you believe in your early teens is almost by definition naive) into Christianity, and then gradually back out to a mature rationalism.

The first discard (though as already explained, it was really

a non-starter) was of course strict young-earth literalism. Then I started actually reading the Bible -- every word, from Genesis to Revelation -- and ran into books like Job. Was it really likely that this guy would compose epic poetry while sitting in misery amidst the ruins of his life? And was there anything really lost from the central theme of the book by reading it as an abstract inquiry into the question "Why do bad things happen to good people?", rather than a literal history? (BTW, the answer as eventually presented by God seems to be: Because I'm God and I can do whatever I choose, and I'm way smarter than you. So just STFU.) Similar considerations apply to Jonah. So, I accepted the idea that the Bible could still bear a message from God, even if the narratives were partially fictional. Note that this is not, strictly speaking, a repudiation of Biblical inerrancy -- it's just a question of interpreting the intent of a particular book. If Jesus taught in fictional parables, why couldn't some whole books be the same sort of thing?

The second major discard was the kind of crude salvationism that goes like: "Pray this magic prayer and you get to go to heaven. Otherwise demons will torture you for all eternity". I'd like rant about that at length, but for now I'll put it succinctly: if that message doesn't stick in your craw, then you seriously lack a sense of moral proportion and human compassion. If you worship a God who really operates that way, then you worship a psychopathic monster worse than Hitler, Stalin and Pol Pot combined and multiplied a hundred-fold. Indeed, many or most evangelicals I meet seem to have found some way to soften that stark anathema, and I was no exception. In this I was much influenced by the writings of C.S.Lewis (particularly The Great Divorce), who took a much more nuanced view of the whole salvation/damnation issue. Lewis' view isn't that God gets permanently pissed off at you for every slight misdeed, but rather that sin is, at base, the act of rejecting God, and thus rejecting the very Source of Life and Ground of Being. Consequently, one becomes a less "complete person". Post-mortem, that process continues, like the damned in The Great Divorce, collapsing into self-centredness and self-loathing. God does not damn us to Hell; we damn ourselves to the hell of our own mental solitude. As a theology, it's sort of a combination of Plato and modern psychology.
The main point of all this rambling is that holding such a position makes the answer to the question "Who can be saved?" somewhat less obvious. And if it's no longer strictly limited to those who have "accepted Jesus into their hearts", then the way is open (though not inevitable) to make it steadily more inclusive.

Notwithstanding the above, at the time I graduated from university (and got married) I was still a practicing Evangelical. At Queens I'd been involved with the Navigators (which if you know much about the Evangelical scene, you know as one of the most gung-ho "Are you saved yet? Let me read you this tract...." groups out there), and kept that up after moving to Ottawa. However, there were other influences at work. One was the rise of the American Christian Right, culminating in the election of Ronald Reagan. I've blogged on this before, the net effect being to drive me socially away from fundamentalism, to go along with my growing intellectual differences. A second one was entering the normal life of work and meeting a greater variety of people -- school in many ways can be a bubble where you only know other students, all of whom are about your age, and hang out with only a certain clique of that already-restricted society. And of course, I now had leisure to read and think about things other than next week's problem set.

But the Big Event that gave a real kick to the process of slow apostasy was the impending arrival of our first child. As I contemplated how we were planning to raise this child, I realized that I just couldn't, with a straight face, impart to him Christianity as I knew it. I claimed (even to myself) that I still believed most of the important conservative doctrines, but when I really stopped to examine the state of my belief, I realized it was a shell: my heart was no longer in it, and never could be again.

So I quit going to church. And stayed that way for about two years. When we resumed, rather than to the evangelical churches of my past, it was to a local United Church of Canada -- a denomination spanning the range from moderate conservative to way-out liberal (and I think I traversed that entire spectrum in the 15 years we spent there), with a strong emphasis on social action and practical Good Works. And the best part was: no one cared how orthodox you were, and no one asked how your spiritual life was going. It was a great place for a refugee from fundamentalism to have a good long think -- and it was a great relief to give up feeling the obligation to support beliefs that no longer seemed supportable.

This post is now getting plenty long, so I'll leave off there. I promise that it won't take another year to finish the story!
Images from Wikimedia Commons:
King James Bible, 1611
Paradise and Hell, Hieronymous Bosch, c. 1510
Posted by Eamon Knight at 11:04 PM No comments:

While looking up showtimes for Indiana Jones, I discovered that Expelled has arrived at our local movie-plex. Knowing what I know about the latter movie's contents (including stuff coming from the flick's producers), I am unlikely to see it. Not only do I refuse to enrich this bunch with the royalty from my ticket purchase, I've got more enjoyable and productive ways to spend 90 minutes of my life (like bathing the cats, or going to the dentist).

However, the AMC website blurb is worth seeing, just for the ironic humour value. Click here, choose the "Synopsis" tab, scroll down so you can see the Movietickets.com ad below the text -- and watch (but do it before the ad goes away -- who knows how long this turkey will last?)
Posted by Eamon Knight at 6:42 PM 3 comments: 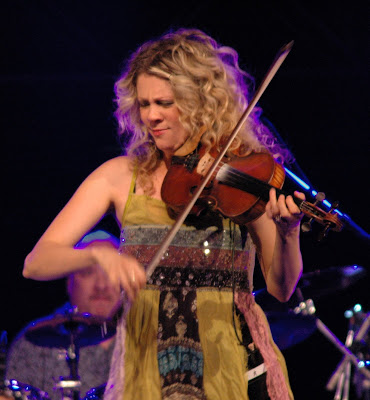 Natalie MacMaster at the 2005 Ottawa Folk Festival
About once a year, I manage to take a photograph I'm really proud of. In this case, it was beginner's luck. We had bought DSLRs (his-'n-hers Nikon D70s's) a few days before the Festival and I decided to bring one along to play with on the weekend, just to get used to the camera.

Two things I immediately appreciated about digital:
The above picture was taken maybe 20 meters from the stage, with the zoom maxed out at 300mm, hand-held. I hadn't yet heard the rule of thumb that you shouldn't shoot slower than the reciprocal of the focal length, and at 1/30 of a sec or so, a lot of the shots came out blurry due to camera shake.

But a few didn't, and the one above is the lucky winner: just caught the magic moment with Natalie backlit by a purple spot, leaning into her fiddle, with a little motion blur on the bow hand so you can almost hear the music happening.

Full disclosure: Image shot in landscape and cropped to tighten up the composition; some reflected highlights (notably: the sheen on the drummer's bald head!) toned down using GIMP.
Posted by Eamon Knight at 11:55 PM 1 comment: 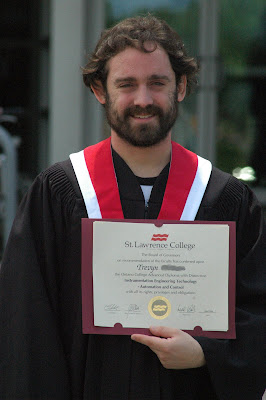 So, a mere six days later, and we're back in Ontario, where the handsome guy at left received a diploma in Instrumentation Technology (Computer & Automation), with distinction, from this place. 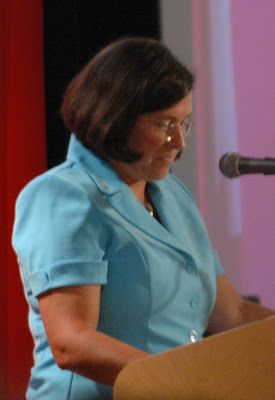 This time, the recipient of the obligatory "Thank you for coming and speaking to our graduates" appreciation certificate was Vicki Keith, who got famous by swimming across a bunch of large bodies of water, and now works with disabled kids (I expect someone already pointed her to the obvious video).

So: two kids all college edumacated. When do I get go back? I'm tired of them having all the fun, while I just get to pay for it.....
Posted by Eamon Knight at 11:52 PM 1 comment:

They also gave a degree to this elderly lady (below). I think she's some kind of American politician. No one important, anyhow.

Stay tuned for the next stop on the Great 2008 Graduation (and Furniture Moving) Tour....
Posted by Eamon Knight at 2:30 AM No comments:

Labels: family
Newer Posts Older Posts Home
Subscribe to: Posts (Atom)
[Freethinkers are] a motley mob of deists, agnostics, secular humanists, pantheists, atheists, and who knows what else, and organizing seems to be against our nature. We have to resist that; we have to be willing to work together while recognizing the diversity of perspectives under the umbrella of freethought, and treat that variety as a strength rather than a weakness.
--P.Z Myers