Take a good look at the grinning face at right. It belongs to a pompous, whiney lawyer who works at the Discovery Institute, named Casey Luskin. To demonstrate the pompous and whiney bit: he claims that he owns copyright to that photograph, and can forbid people from posting it on their websites.

However, as Tim Sandefur -- also a lawyer -- explains:

Luskin is, of course, a public figure who has voluntarily injected himself into a matter of national public dispute, and people using his photograph are not profiting in any way from doing so....

I don't know how well the legalisms translate across the USA-Canadian border, but I'm happy to join the small but growing chorus of bloggers posting his image -- just to prove we can.

My attempt at starting a Google Bomb follows:

If you post Luskin's picture, drop me a line so I can add the link.....
(Hey, it worked great on Michael Egnor)
Posted by Eamon Knight at 10:21 PM 1 comment:

Ideologues: Don't they read their own history?

Are you afraid that Christians will encourage honesty, fidelity and truth? Just think... We might even obey Christ's command to love our neighbor as ourself and bless others with goodness.

Admittedly that doesn't sound like such a bad thing, on the face of it. But what, concretely, does it actually mean? Well, Angela has a most interesting website that tells you all you really want to know about her. For example, on the page "A True Christian Woman", we learn about several gals whom Angela considers heroines of the Faith. Among them is Jenny Geddes, an Edinburgh lass who in 1637 had a bit of a temper tantrum in church, which included throwing her stool at the minister. What terrible thing had the minister done? It seemed he had attempted to "introduce a different style of Worship than Presbyterian".

Geez Louise. About 15 years back, I was on the Worship Committee of our church, which was responsible for setting the order of service, choosing hymns etc. And when we changed something, occasionally people would complain. But I don't think we ever had anyone throw the furniture at us. Is this Angela's idea of "blessing others with goodness"?

Of course, I'm leaving out a bit of context here. The liturgical crime the minister committed was, apparently, to read from an Anglican-flavoured Prayer Book introduced by Charles I and his Archbishop -- a slap in the face to Scottish nationalist feeling (I get the impression that, as so often happens, the religious fight is just the visible proxy for the real issues). And in fact, the stool-throwing lead to bigger things:

Jenny Geddes has been credited with sounding the alarm which led to the Scottish National Covenant, English Civil War, the execution of Charles I and Cromwell's conquest of Scotland.

Civil War. Great. If it's all the same to you, Angela, I'm not sure I can handle being blessed with that much goodness.

But the irony is that Angela seems to be missing a crucial point: the entanglement of government power with the affairs of the church is central to the Jenny Geddes incident and its sequelae. First, the English state church tried -- with the backing of the monarchy -- to impose itself on the Scottish Church. And few years later (as the end result of the larger incompetence of Charles I), Cromwell imposed his Puritan vision on the whole of Great Britain -- which was great for the Presbyterians, but if you were High Church Anglican (or worse, Catholic) your life was likely to suck rather badly.

The take-home lesson is that theocrats don't stop with persecuting the damned atheists and the sexual perverts: even the "wrong" variety of their own sect eventually winds up in trouble with the Powers That Be. Which is why the modern separation of church and state (whether expressed de jure as in the American Constitution, or observed de facto as in much of the rest of the West) is such a marvelous invention, and a precious gift to be defended. What the Angela Wittmans of the world don't see is that we are all safer because of that.
Posted by Eamon Knight at 10:46 PM 2 comments:

Apparently, I'm blasphemous (but only a little)

TimeOnline brings us this list of 20 incidents of blasphemy, rated according to various impact criteria (including body count). The ones that strike me are: 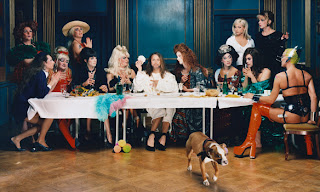 Photographs showing Jesus eating with homosexuals and transsexuals in an exhibition in Sweden, raised eyebrows in Europe between 1998 and 2000. The vivid images caused Pope John Paul II to cancel a meeting with the Swedish Lutheran Archbishop Karl Gustav Hammar who supported their exhibition.
Vulgarity: 3 Criminality: 0 Religious impact: 7 Political impact: 0 Deaths: 0

I don't see what JP2's problem was -- wasn't Jesus known for hanging with the outcasts of society?

But this one is just amusing (especially the text highlighted in red):

14. The Life of Brian
Arguably, Monty Python’s finest hour the Life of Brian is a comic biopic of Brian Cohen, born at the same time as Jesus and mistaken for the Messiah. A satire on excessive religiosity the film was banned in many towns in the UK for its alleged blasphemous content. Particular offence was taken at the crucifixion scene where those being executed burst into song with the theme tune “Always look on the bright side of life”. In New York Nuns and Rabbis picketed screenings of the film, which was completely banned in some states. In Ireland Life of Brian wasn’t shown for eight years after it was made and not for 11 years in Italy. Just this year, a screening of the film in a church in Newcastle Upon Tyne caused uproar from conservative Christian group Christian Voice.
Vulgarity: 4 Criminality: 0 Religious impact: 5 Political Impact: 2 Deaths: 0

To me, the funny part is: a few years ago, my wife and I showed this video, in the church, to the youth group during the Easter sleepover, including the presence of a minister and the pastoral intern, with nary a protest heard. Who knew we were being so daring? The intern related how the seminarians she knew all loved Life of Brian.

Of course, this was the United Church of Canada, where just about anything goes.....