....which is to say, my mother's 89th birthday. Well, except that she sort of missed the occasion by three years and a few months. So I guess that means she won't be wanting any cake or candles.

What, you thought I meant some other kind of day? Well, Mom was never much of a blasphemer. I mean, she was an agnostic all her adult life, which I guess counts for something in that department. But she was really a rather quiet, reserved woman. About the closest she ever got to overt blasphemy was that, in moments of frustration, she would mutter "Damn!" under her breath (which these days, hardly counts as blasphemy at all). And that's probably about the limit for an English girl of her generation.

Personally, I'm not big into explicit blasphemy. Even my hammer-on-thumb expletives tend to draw on the lexicon of bodily function, rather than theology. So I'm a bit ambivalent about Blasphemy Day. Somehow, it smacks of the big boys on the playground teaching some little kid all the naughty words. To me, just saying "God doesn't exist" remains a quite sufficient blasphemy -- what else needs to be said?

But my ambivalence goes deeper than that.

One chief aim of Blasphemy Day is to make it safe to diss religion. Trouble is, I've not personally spent much time in any space where religion-dissing wasn't safe. To start with, my family of origin was agnostic. My parents didn't run down religion, but they thought it was false, and told me so. When I hit the cynical adolescent stage, religion was certainly among my targets. And then when I did get religion myself, it was one that in the local context was a somewhat eccentric minority sect -- and I do this while I'm in an age group that punishes non-conformity (not that I ever had much chance of being part of the in-crowd: I was a hopelessly geeky misfit, even without the religion). Then I go off to university, and where I am conspicuously not into certain prominent facets of dorm life. So my religion, at least, was never quite respectable. A few years later I finally get into a more mainstream religion -- and soon after that, I discover Usenet, where absolutely nothing is sacred, or off-limits.

So for most of my Christian period, I seemed to have a talent for innocently wandering into free-fire zones.

Now I'm an atheist -- and therefore part of another minority religious group (using "religious" here in a loose sense). And yeah: Danish Mohamed cartoons, rampant Islamism, thin-skinned Irishmen passing anti-blasphemy statutes, the Smallkowski affair and all the other small-minded small-town bigotry that percolates out of the American hinterland by way of the internet these days -- I know all that, but very little of it is here, in Ottawa, in my face. So let's not overstate the case: in this particular neck of the woods, we have it pretty easy.

It may be that my very first personal encounter with the Thou Shalt Respect Religion meme was in the context of the Ottawa Atheist Bus Campaign, in which several city councillors thought that their personal offense at the rather mild advertisement was grounds for controlling other people's speech rights. And that experience made me realize something: we don't, in pluralistic, liberal urban Ontario, go in for the kind of bare-knuckle bigotry of some places.What we've done instead is, in a very polite-Canadian way, to bury the religion debate and agree not to discuss it. There may not be a lot of overt piety in the Canadian character, but there's a lot of Dennett's "faith in faith" -- it's a Good Thing, so don't question it too hard. That's Not Nice. Running the bus ads broke that taboo -- hence the reaction.

So a few of us (I don't know how many; I'm not planning it) are apparently celebrating Blasphemy Day by going downtown tonight wearing appropriately irreverent T-shirts. I'm going, because I think that taboo should stay broken. Because I think the thin-skinned types who wanted to squelch the bus ads should continue to be offended and uncomfortable, until they get over their own self-importance. Because I think unbelief should advertise itself the same as belief does, daily, on every corner where there is a church or mosque or synagogue. Because I think that, opening that space for out-and-explicit unbelief here helps to open it everywhere.

Because I think.
Posted by Eamon Knight at 8:00 AM 3 comments:

Postscript on Felines and Fiction

People (particularly data-entry staff at veterinary clinics) would sometimes ask where we got the name of our late pet from (usually after they've asked how to spell it, or if they encountered the written form first, how to pronounce it. It's: KEE-zhay). Classical music lovers generally recognize the reference to Sergei Prokofiev's Lieutenant Kizhe orchestral suite, and are further aware that the music was originally written for the 1934 film, which in turn is based on the novella by Yuri Tynyanov.

The action of the story revolves around the efforts of the Russian Imperial court to hide from the vain, mercurial Tsar Paul I the fact that he has made a mistake: that the name and persona of "Lieutenant Kizhe" is the result of a scribal error. The afore-linked Wikipedia article adequately describes the plot of the novella (the movie changes a few non-essential things), so I won't belabor the details. Though intended as a satire on the Tsarist bureacracy, one can't help wondering if there is not also a subtle jibe being levelled against the Stalinist regime under which both the book and film were made. 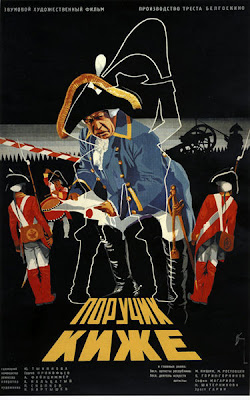 We discovered only yesterday that the film (with English subtitles) is now available at the Internet Archive and Google Video. (I think it's been a while since we last searched for it). So last night, in memory of our furry friend, we hooked up the laptop to the TV and sat down to watch....
I'm a lousy movie critic: about the best I can manage is "Liked it" or "That sucked". But this flick is definitely the former. It is made early enough in the "talkies" era to have preserved some of the silent-film propensity for sight-gags. For example, the prison commandant, presented with the non-existent Kizhe for incarceration, with perfect gravity searches the ground around the guards for this "confidential prisoner, who has no shape". No dialog is spoken, or needed. Later, the entire sequence of Kizhe's wedding comprises about 10 minutes of high absurdity. While there is understated slapstick, it never reaches the over-the-top level of the Keystone Cops. And behind it all is Prokofiev's music; the elements of what later became an orchestral classic.

So: it's a quirky kind of closure. We've loved the music for years (enough to name our seventh cat after it), and been fascinated by the back-story, so it was great to at last see that story played out. And we learned one detail about the doubly-fictional Lieutenant, which is perhaps a fitting memorial for the cat who lived in a non-believing household; who always knew what he wanted, and always let you know about it. From the film's closing soliloquy -- a kind of reverse eulogy on his now-deceased officer -- delivered by the Tsar: 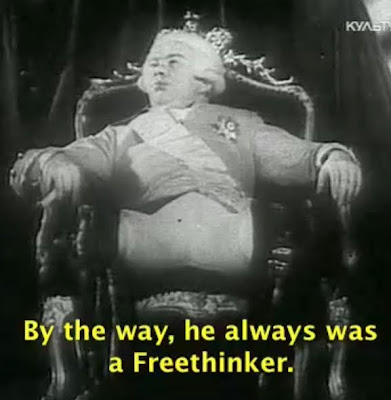 (Movie poster from WikiMedia Commons)
Posted by Eamon Knight at 10:12 AM 3 comments:

With sadness, we announce the loss earlier today of our companion of the last eight years, and occasional co-blogger, Lieutenant Kizhe the Siamese cat. For the past four months Kizhe had been suffering from a series of stubborn bacterial infections and an associated inflammatory condition, which eventually progressed to the point of open sores. Kizhe endured one surgery and several rounds of antibiotics and steroid treatment, however the sores were not healing and he was growing progressively weaker and more anemic. It became apparent that he was uncomfortable and that recovery was unlikely, hence The Decision was made. He was euthanized at home this morning, on his favorite chair in the sunroom, surrounded by the sounds and smells of the backyard. This picture was taken a few days ago:

Many thanks go to the vets and staff of the Merivale Cat Hospital, in particular to Dr. Emma Thom who spared no effort in her attempts to diagnose Kizhe's condition, including consulting with experts around the world via the internet, and also to veterinary technician Jessica who assisted Dr. Thom with the euthanasia.

Kizhe in younger days, contemplating the possibilities of the internet: 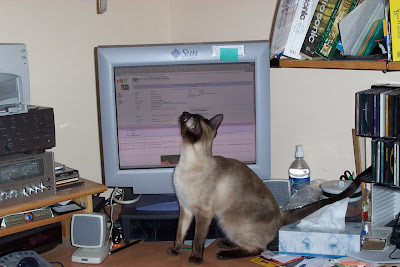 Labels: cat blogging
Newer Posts Older Posts Home
Subscribe to: Posts (Atom)
[Freethinkers are] a motley mob of deists, agnostics, secular humanists, pantheists, atheists, and who knows what else, and organizing seems to be against our nature. We have to resist that; we have to be willing to work together while recognizing the diversity of perspectives under the umbrella of freethought, and treat that variety as a strength rather than a weakness.
--P.Z Myers