Among the newly-installed President Obama's first acts has been to lift the ban on US foreign-aid funding for groups that facilitate abortion. This was quite predictable,as it follows a pattern of recent history going back to Reagan, of Republican presidents imposing the ban, and their Democratic successors lifting it. Also predictable was reaction from Certain Quarters -- like the Vatican, as represented by Archbishop Rino Fisichella, president of the Pontifical Academy for Life:

....the arrogance of someone who believes they are right....

What is important is to know how to listen, without locking oneself into ideological visions with the arrogance of a person who, having the power, thinks they can decide on life and death. If this is one of the first acts of President Obama, then with all due respect it seems to me that we are heading toward disappointment even more quickly than we thought

The irony of a dogmatic church complaining about someone else's "arrogance" and "ideological visions"....needs no further comment from me. And as for "life and death": this is the same Church whose bizarre views on sex and reproduction have almost certainly worsened the AIDS crisis in Latin America and Africa.

I think we should take up a collection to buy a bunch of mirrors, to be installed in the Vatican. They really need them over there.
Posted by Eamon Knight at 8:42 PM 2 comments:

Sure, the Darwin fish is a joke, and a clever one at that. But most committed Christians, especially fundagelicals, are not known for their sense of humour - they take themselves very seriously, and often expect that others see (or should see) the world in simple black and white, just as they do. So, a Christian puts a fish on his car - maybe just the icon, or maybe it contains "Jesus", or the Greek acrostic "ΙΧΘΥC" (Jesus Christ, God's Son, Saviour). By this they identify themselves as followers of Jesus. Then the Christian sees a car decorated with a fish (with feet - yay tiktaalik) that says "DARWIN". The logical deduction: Jesus:Christian::Darwin:Atheist. Not true, of course, but hard to fault them for reaching that conclusion.

(I prefer the fish with "GEFILTE" inside - now that's really funny, and unambiguous enough even for the Christians.)
Posted by Theo Bromine at 3:14 PM 3 comments: 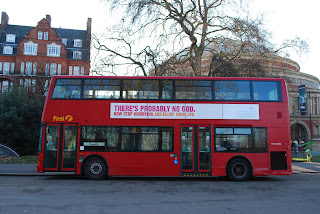 Everyone is no doubt aware of the Atheist Bus Campaign in Britain, mounted by (among others) the British Humanist Association. As of this week, there are some 800 public transit busses in various cities bearing an ad reading: "THERE'S PROBABLY NO GOD. NOW STOP WORRYING AND ENJOY YOUR LIFE". Around the atheist blogosphere, there has been some discussion of (and complaints about) the fact that the PTB who regulate British advertising required the insertion of the qualifier "probably", as the non-existence of God is not considered absolutely proven (this is the same reason that commercial ads rarely say anything definite enough to constitute an actual claim). As Larry Moran notes, such standards of evidence are not uniformly applied across all forms of public expression. Be that as it may, I actually prefer the qualified version, so I consider the amendment serendipitous.

Partly, it's a personal quirk: I don't like absolute statements. At all....at least, not much....OK, on occasion I suppose.... Alright, you get the idea. To me, our attempts to grasp reality are full of nuance and uncertainty, and I feel compelled to acknowledge that. So the qualified version fits my temperament.

But there's also a practical advantage: I think the qualifier makes the message less confrontational, and thereby increases the number of people who will accept it -- and yet, I think it still moves its target audience in the same direction, and by roughly the same distance. I know, some atheists prefer a no-compromise, no-quarter-given approach. I just happen not to. There's certainly a time to be absolutely blunt, with no subtleties -- but it shouldn't be the default. A little friendliness rarely hurts.

To put it another way, there are multiples ways of expressing atheism. One is: "No, there IS NO GOD, DAMMIT! Now bugger off and take your imaginary friend with you!" But that response is essentially forced on atheists by 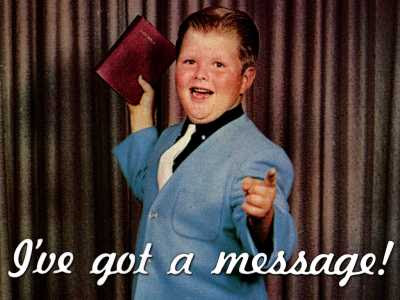 a certain kind of aggressive religion. (Not me personally -- in meatspace I lead a pretty sheltered life. I have to go online if I want to find someone trying to re-convert me). As part of an ongoing interaction, it's undoubtedly justified in some circumstances. But I take the bus ad as a way of starting a conversation, and the blunt opening "There is no God" gives more importance to the "God Question" than is warranted. It accepts the premise that "Does God exist?" is an important question -- maybe even the Most Important Question Of All (especially when backed up by thinly veiled threats). I used to agree with that premise -- I thought it really mattered. Certainly, back when I was an intellectually-oriented Christian with an interest in apologetics, proofs of (the Christian) God's existence seemed very important to me. Over time, however, the subjective importance of that question diminished. When I finally became an atheist, it wasn't so much that I came up with a definitive refutation of the God hypothesis -- it just stopped mattering to me. So my expression of atheism tends to be along the lines of: "Probably not and the question isn't really all that interesting. I've got more enjoyable and productive ways to spend my time, than thinking about it".

So to my ears, that word "probably" gives the bus ad a certain off-hand spontaneity, just the right air of casualness -- and thereby denies the premise of the evangelists, that the matter is so supremely important that we must all dedicate ourselves to figuring it out. It's not -- any more than agonizing over the existence of unicorns or gremlins. In itself, the God Question doesn't deserve to be taken seriously. If it weren't for the historical-cultural weight this concept carries, we wouldn't even be having this conversation.

Labels: atheism
Newer Posts Older Posts Home
Subscribe to: Posts (Atom)
[Freethinkers are] a motley mob of deists, agnostics, secular humanists, pantheists, atheists, and who knows what else, and organizing seems to be against our nature. We have to resist that; we have to be willing to work together while recognizing the diversity of perspectives under the umbrella of freethought, and treat that variety as a strength rather than a weakness.
--P.Z Myers