....'cuz she's just a gurrrllll. And that meltdown in the Katie Couric interview? She's just appealing to her Pentecostal base by speaking in tongues.

But never mind: Sarah is OK, 'cuz she's got character. And what, you may ask, is this "character" quality? I'm not sure, but it doesn't seem to include telling the truth or understanding anything about the job. It doesn't seem to preclude hanging out with lunatic clergy (unless of course, it's the other guy's lunatic clergy).

But none of that matters, 'cuz if you've got character[tm], when push comes to shove, and the chips are down, and your back's to the wall, and the crick is rising, and the rubber is meeting the road, and the cliches are coming thick and fast: you'll do the Right Thing.

So I'm still not real clear on this "character" thing, but I have a vague impression it has something to do with shooting Muslims. Or maybe moose. They probably look the same through the 'scope of Sarah's rifle.
Posted by Eamon Knight at 11:02 PM 5 comments:

OK, really only a few toys and some geeks: 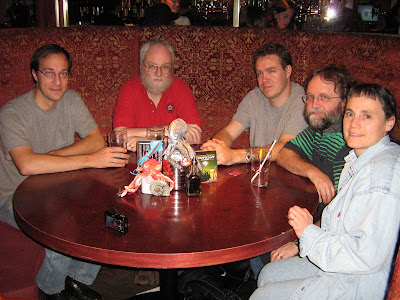 The beer was (of course) great. But for some bizarre reason the Clocktower doesn't serve calamari.
Posted by Eamon Knight at 1:16 PM 3 comments:

Ottawa Pharyngufest TONIGHT! Be there....

For all local fans of Pharyngula (or anyone else who just wants see what these strange people and/or this strange town is like): tomorrow night is the appointed time for the first ever Ottawa Pharyngufest!

Q: What do you say when you discover that the pirates are plotting to take over the world?

And there was dancing in the aisles..... 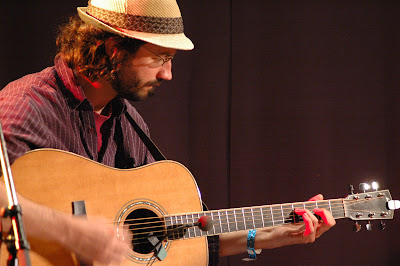 And on Jew's harp: 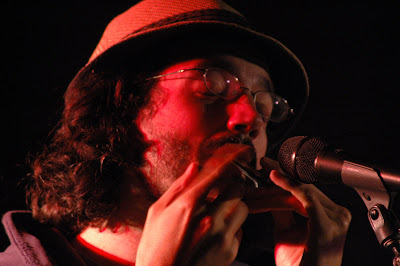 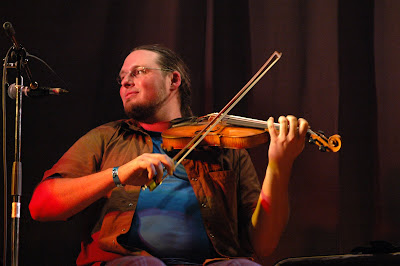 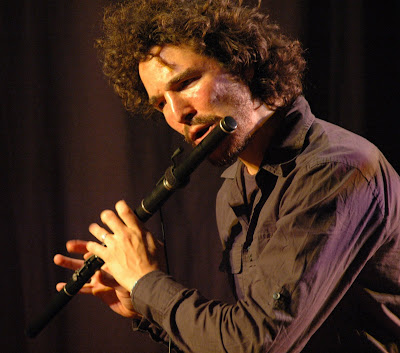 And just to prove I wasn't lying in the post title: 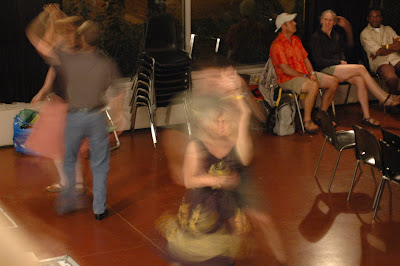 If you like an energetic blend of traditional folk and modern folk/jazz/celtic/whatever -- then be sure to see Genticorum if they come to your town.

Even I was dancing. This was taken Friday at the Dance Tent, doing....well, I don't think it was square dancing as such, but some sort of organized group choreography with a caller telling us what to do next. I blame the (excellent) beer I'd just drunk for loosening my normally shy, self-effacing inhibitions to reveal the party animal that lurks within: 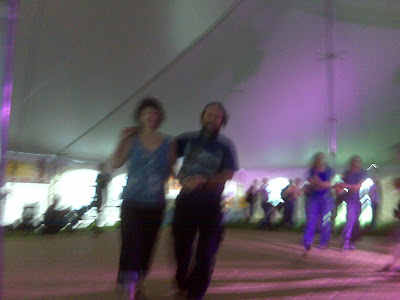 It was a fantastic Festival; the Dance Tent is a great idea (though they need to turn down the volume for the sake of the other west field stages). Looking forward to next year already.....
Posted by Eamon Knight at 9:54 PM No comments:

At the end of a thorough fisking of Steve Fuller's (who attempted, at the Kitzmiller trial, to defend ID's legitimacy as science on rather post-modern grounds, thus proving that the Absolutist Right will happily fraternize with the Relativist Left whenever it is convenient) views on Intelligent Design and the historical relation between science and religion, Grayling almost tangentially delivers the following gem on the definition of "humanism":

Humanism in today's acceptation of the term is the view that our ethics and politics should be premised on our best understanding of human nature and the human condition, as revealed to us by empirical enquiry and by the arts, literature, reflection, and the grown-up conversation of mankind. It refuses to accept that instructions for how to live, act and believe come from the far past or outside space and time, and it refuses to believe that the whole point of life is to get membership of a posthumous choir.

Posted by Eamon Knight at 10:37 AM No comments:

Sorry, fellow atheists, but I really can't argue with the logic of this: 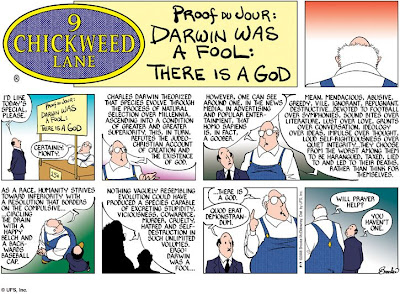 (OK, as PZ points out, I can argue with it. But why spoil the joke?)

Posted by Eamon Knight at 11:27 PM No comments:

It feels sort of surreal when you find your own jokes being used as serious arguments by other people. The other day I commented thusly at Dispatches from the Culture Wars, regarding Sarah Palin's foreign-policy experience:

Hey, she's spent most of her life and all of her career sandwiched between Roosha and Socialist Canuckistan! Obviously she's got lots of experience defending Amerika from it's enemies! Screw McCain -- Palin for Prez!

And wouldn't you know it? Today the ever-risible Denyse O'Leary, in defending Palin from a criticism by Ben Stein, raises exactly that point -- apparently in all seriousness:

Yep. Being off in the hinterland of your own country, with your nearest neighbours being the hinterlands of two other countries, being about as far as it's possible to get from the centres of power of any of those three countries -- according to Denyse, that counts as foreign policy experience.

Am I supposed to laugh or cry?
Posted by Eamon Knight at 9:28 PM 2 comments:

ARGH! WHAT HAVE THEY DONE?

OK, I gave them a chance for a whole week. And I tried to get used to it, really I did. But the verdict is in:

I HATE YOU, CBC!
I HATE YOU!!
I've been listening to CBC FM/Stereo/Radio 2 all my adult life. I was really attached to waking up in the morning to a bit of Mozart or Schubert, occasionally varied with a little soft jazz. I mean really attached. Nothing too jarring before breakfast, please. And a strong preference for instrumentals over solo voice.

And now, just when I hit the demographic (50+) CBC 2 is supposedly aimed at they take it away. Instead we get...I don't even know what that genre is called -- Soul? R&B? Some kind of recombinant DNA mish-mash of jazz, rock, blues and I don't-know-what, with all of the worst aspects of each and none of the better. Yesterday morning Tom Allen even played Michael Jackson. Michael. Fornicating. Jackson. Is this really what my generation is supposed to like? I must have missed the memo.

No more. We bought a clock radio with a built-in MP3 player. Load up a bunch of decent music, and wake up to that, instead. The news, we can get off the web. Buh-bye, CBC....

UPDATE:
The good news (as I discovered today by accident) is they still have Jurgen Gothe, who reliably plays decent music. The bad news is he's been banished to a single hour, late Sunday afternoon. grumble, grumble

The Tao of Folk Music

More Folk Festival pix, this time of Tao Rodriguez-Seeger and his accompanists. I wonder if he ever gets tired of being "the grandson of...." 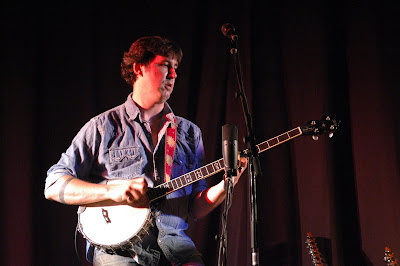 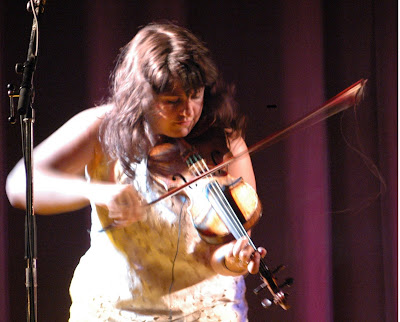 Communing with his bassist: 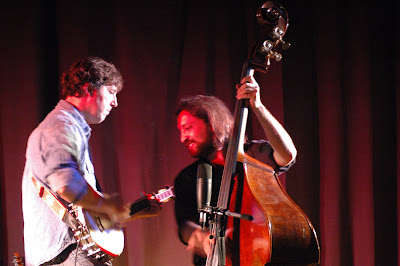 In full cry on guitar: 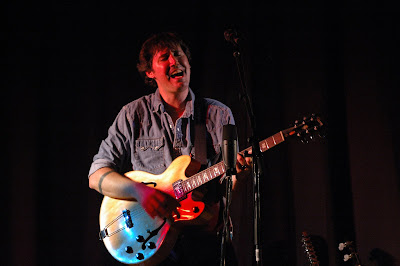 Genticorum got around a lot this Festival. Yann Falquet joined Tao for part of the set: 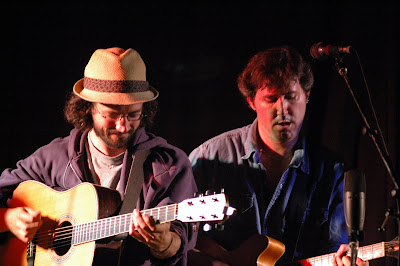 Photos taken on the fly sometimes capture odd poses and expressions -- which suggest comic possibilities (well, if you've got my warped sense of humour, anways....): 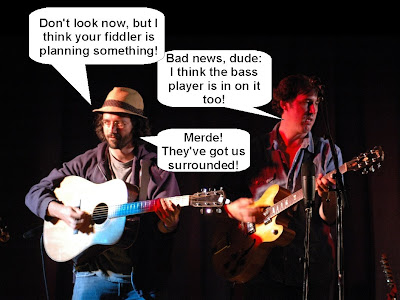 Posted by Eamon Knight at 11:18 PM No comments:

Labels: music, photography
Newer Posts Older Posts Home
Subscribe to: Posts (Atom)
[Freethinkers are] a motley mob of deists, agnostics, secular humanists, pantheists, atheists, and who knows what else, and organizing seems to be against our nature. We have to resist that; we have to be willing to work together while recognizing the diversity of perspectives under the umbrella of freethought, and treat that variety as a strength rather than a weakness.
--P.Z Myers