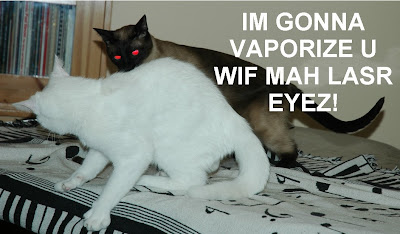 The Shuttle is Carrying What? 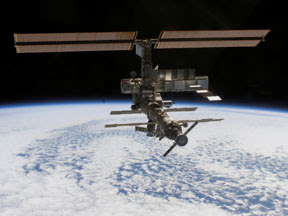 One, about 50cm long, is a replacement pump for the ISS's zero-g toilet. If you understand even a little basic physics, you can see that excretion in free fall has certain, um, unusual hazards associated with it, and as a consequence the toilet facilities have to be rather high-tech. And it's a bit of a nuisance when a piece of that technology goes on the fritz. So the ISS crew are looking forward to getting the space-loo working properly again.

The other, and much larger item (about 11 meters and 15 tonnes) is a Japanese lab module to be affixed to the side of the ISS. The name of the module is (wait for it).....

Kibo
In Japanese, this means "hope". So let's hope the crew makes sure to install the correct item in the correct place....

OK, I'll admit it's childish.
Posted by Eamon Knight at 10:11 PM No comments:

What do these people have in common? 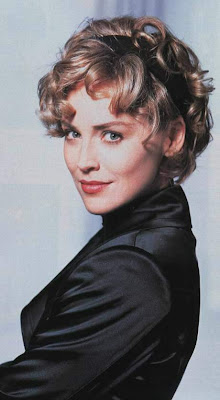 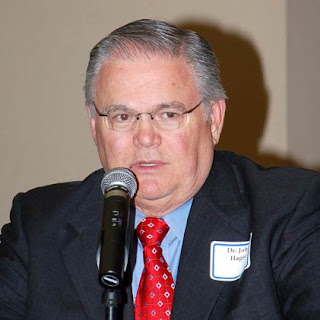 Answer: They both believe that there is a mystical magical power that uses the forces of nature to punish wrongdoing in the here and now.

On the left is John Hagee, pastor of Cornerstone Church in San Antonio, Texas. He is on record as claiming that Hurricane Katrina was sent by God to punish New Orleans for being too friendly to Teh Gays. On the right is actress Sharon Stone, who speculated that the recent Chinese earthquake was due to "karma" because of Chinese mistreatment of Tibet and its people. Now, I do have some sympathy with Stone's concern for Tibet, whereas I think Hagee is just a vile stupid bigot. Moreover, Stone has apologized and perhaps somewhat retracted the remark, while as far as I know, Hagee still has it in for gays and The Big Easy. However, that doesn't change the fact that they have something else in common: they're both wrong. As in: you have to be a bit stupid and superstitious to have thought that way in the first place (but then, charismatic preachers and actors are not, in general, classes of people known for their intellectual prowess).

Something else Hagee and Stone (actually, their respective Cosmic Avengers) have in common: they've got lousy aim and produce lots of collateral damage. The earthquake didn't hit Beijing, and take out just the Chinese leadership (ie, the people actually responsible for Chinese policy on Tibet). Instead, it hit a few thousand kilometers away in Sichuan, and killed about 70000 (and still counting) mostly ordinary folk. In New Orleans, the worst-hit areas were not the "gay village", but regular middle and working class neighbourhoods. Which is another reason why it's stupid to believe that natural disasters are divine/karmic retribution.

Actually, it's worse than just silly to believe that: it's potentially very dangerous. Consider the following hypothetical: Suppose that we live next door to each other. Further suppose that, according to my religion, my god disapproves of you in some way -- your sex life, your rival religious opinions, your dietary practices, whatever.

Now, if I believe that you'll have to answer to my god in the afterlife, I may try to warn you of your posthumous peril, but not do much more than that. At worst, I'm likely to become an obnoxious boor, and a pain to have as a neighbour. However, suppose that I think my god is so pissed off at your behaviour that he's likely to take direct action to abate it sooner than that AND that he's got the aforementioned tendency to overdo things -- well, now I'm afraid of becoming collateral damage. So I'm likely to take some preemptive action of my own. And if there's enough people who also think like me, things could get very ugly for you.

I'll grant that there are some significant differences between Stone and Hagee. For one thing, Sharon Stone is a lot thinner and better-looking. Another is that Stone's Western-celeb Buddhism probably renders her not much of a threat to those she disapproves of (and besides, her concept of "karma" seems rather vague). But Hagee specifically believes in a God who punishes whole cities for tolerating the activities of some individuals. He even encourages other people to believe the same. And that is beyond stupid, beyond even dangerous: it is evil.

On Tuesday, the anonymous Author of Jesus and Mo left the dialog out of the strip and invited his (her?) readers to fill them in. I'll take that as permission to steal the artwork and get a blog-post out of it: 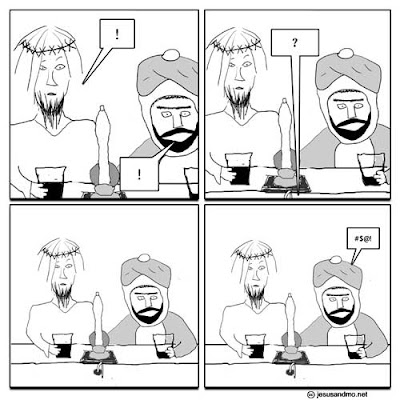 Jesus: Our Creator hath abandoned us today, and left us with no words to speak!
Mo: And we can do nothing without him!

Barmaid: But didn't you both manage to get yourselves down to this pub, order drinks, and get through the whole first panel of dialog, all on your own?

See other contributions (some of which, I'm sure, are much better than mine) at the original site.
Posted by Eamon Knight at 10:08 PM 3 comments:

This is a photo of my buddy Bertrand Alfred Russell Wallace North Whitehead Insufficient Delta-Vee: 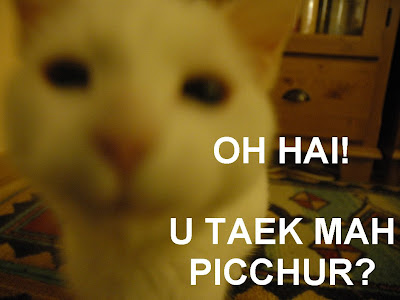 (LOLCat translation provided by speaklolcat)
Posted by Kizhe the Couch Czar at 10:06 PM No comments:

In case you're one of those people who get the World Wildlife Fund mixed up with the World Wrestling Federation, now you can really be confused: 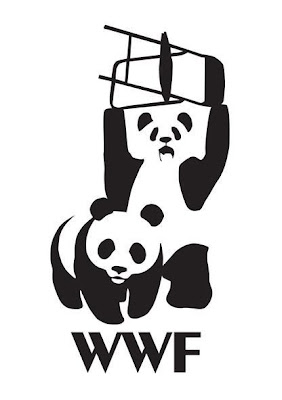 Hat tip: Tim Warris, whom I assume is the author of this cartoon.

Labels: humour
Newer Posts Older Posts Home
Subscribe to: Posts (Atom)
[Freethinkers are] a motley mob of deists, agnostics, secular humanists, pantheists, atheists, and who knows what else, and organizing seems to be against our nature. We have to resist that; we have to be willing to work together while recognizing the diversity of perspectives under the umbrella of freethought, and treat that variety as a strength rather than a weakness.
--P.Z Myers