World Vision and Arguing With Wilkins

We happen to sponsor two third world children through the Christian aid agency World Vision. Historically, this is a hangover from our Christian days, and I occasionally wonder if we should divert our contributions elsewhere (eg. Plan Canada), but thus far have nothing about it. My inaction stems partly from inertia, but also partly because despite my atheism, I have no general or rigid objection to contributing to faith-based organizations, providing the help they provide is material rather than "spiritual" (ie: evangelism). The world's need is too great to start cavilling at the ideological motivations (within broad limits) of this or that aid group. Getting the job done, efficiently, would seem to be of higher importance.

So it is of some concern to me when someone I respect highly, namely John Wilkins, in the course of a rather scattershot post spouts some recommendations on charities to support, finishing with the following deprecation:

Whatever you do as an official reader of my blog, do not contribute to the evangelical and anti-family planning WorldVision, who, I was once told by a fieldworker who had been there, effectively kicked off the Ethiopian marxist dictatorship by their callous behavior during a famine. I also heard from a donor who travelled to the Philippines that their "child" was not seen more than once per year to get photographed and write the year's letters. Yet another worker at WorldVision themselves in Melbourne told me they engage in nasty accounting practices - sending money from one country to their sister organisations overseas so they can claim a set percentage is used overseas. All this anecdotal stuff is three decades old, but leopards rarely change their spots. Anyway, true or not, this is what my official readers should do.

I'd hate to lose my status as an official reader of Evolving Thoughts (if only because the decoder ring is way cool), but I'm not changing my charities without something more substantial than unverified anecdotes (and also allowing for the fact that Wilkins is almost always at least half-joking). I count four distinct criticisms in that paragraph (I don't regard "evangelical" as a criticism, at least not in the context of this discussion), which I will examine as best I can.

A Google search (FWIW) turns up nothing indicating problems about WV's involvement in Ethiopia, so as serious an allegation as it is, I'll have to put that aside for now as neither confirmed nor refuted. Similarly, short of an auditor's report being published, I have no way of checking into allegations of creative accounting (and which may only apply to WV Australia anyway -- the national chapters seem to be semi-independent).

With respect to the complaint about the handling of sponsored children: I'm actually inclined to believe that one, but it's not clear to me that I should object to the practice. My understanding is that support of specific individuals is simply not an efficient or effective way to give aid. In fact (and the WV literature does say this) the money from all sponsors is pooled and goes to the development project of which the child's family or community is a part. But it's easier to get Westerners to open their wallets if you can put an individual human face on their donation, so the kids get used as a sort of advertising proxy. (Note that World Vision is not the only organization using this approach -- the secular Plan Canada mentioned above also does sponsorships).

Now as it happens, I am getting a little tired of the whole "child sponsorship" gimmick. I find signing and sending back (along with a further donation!) some card or trinket every few months to be a minor annoyance on top of dealing with the usual mail deluge, a chore I detest. I'd really rather just send an annual check to the organization itself, for some amount sufficient to relieve my middle-class guilt, and be done with it. Maybe some donors get the warm fuzzies from writing personal letters to their sponsored child, but I'm not one of them. Between being a horribly lazy correspondent and a generally anti-social cuss, I'm never going to be Warren Schmidt, pen-pal to some waif in Timbuctoo. So I may very well (ie. if I ever get off my lazy ass and figure out how) opt out of the sponsorship racket in favour of straight donation, whether with WV or any other organization.

World Vision programs support modern contraceptive methods as part of an integrated approach to effective family planning....Given the high risk for sexually transmitted infections (including HIV), dual protection methods are encouraged. Examples of protection methods include abstinence, consistent and correct use of condoms, use of a contraception method, and mutual monogamy.

A possible counterpoint to the above might be WV's position on abortion. Again from the WV Australia FAQ:

Does World Vision support women to have abortions?

The question would be whether staying out of the abortion business makes someone "anti-family planning". Although the point could be argued, I would say not: if you're doing everything except that, then it seems perverse to apply the label. Now, if there was a group whose "family planning" advice consisted of advocating having lots of kids, and teaching only the rhythm method as a timing-and-spacing strategy, then I'd have little hesitation about calling them "anti-family planning". Another objection might be the refusal of WV US to provide emergency contraception (search for "World Vision"), or even referrals, to refugees. Problematic though this is (especially in cases of rape), it again does not seem to justify calling the entire organization "anti-family planning".

There could, of course, be issues I'm missing in my Web search, e.g. the situation on the ground might be different from what is implied in the official reports; some of the language used is open to intepretation; I might easily have missed less favorable items among the umpteen hundred hits Google turned up. But what I did find says that World Vision does indeed provide effective, modern family planning advocacy and services, contra Wilkins' assertion.

I welcome hard information that might change my mind.
Posted by Eamon Knight at 5:07 PM 7 comments:

A SHOUT OUT FOR INTERNATIONAL CAPSLOCK DAY!!

ONLY A FEW MINUTES LEFT TO CELEBRATE!

AND IN OTHER NEWS: IT'S NOT SOYLENT, BUT IT IS GREEN, AND IT IS PEOPLE (AND IT ISN'T EVEN PAREIDOLIA)
Posted by Theo Bromine at 11:11 PM 1 comment:

A Fate Worse Than Death?

OK, suppose you have a heart attack. And the paramedics arrive and start doing CPR -- chest compressions to keep the brain perfused with oxygenated blood. They have to be done regularly, about 100 times per minute. So, how might you give a paramedic a rhythm to follow, to keep them on time? Well, one obvious way would be music; preferably something with a good strong beat. In fact, specifically (and ironically): the 1977 Bee Gees' hit Stayin' Alive.

Frankly, if I come to in the ambulance and the first thing I hear is Disco, my first thought will be that I died and went to Hell.
Posted by Eamon Knight at 9:32 PM 1 comment:

I was kind of ticked when they killed him off

And I'd love to have one of those spring-loaded quarter-staff thingies! 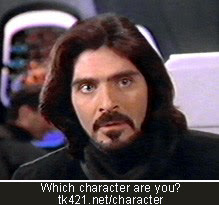 Today I performed a meaningless religious ritual. You know: something that has pretty much bugger-all effect on the real world, but you do it because you feel obliged to, in the service of some big abstraction. So I did it.

The incumbent (who was never my choice of candidate) was predicted to again win by a clear majority, and sho 'nuff currently available returns show him doing just that. So even strategic voting isn't a useful option. Which makes bothering to show up at the polling station at all seem like a futile exercise, no?

Nonetheless, I did. You see, I believe in this big abstraction called Democracy, and its chief sacrament is Voting, so I feel compelled to observe the ritual, just as I have at every election at every level for the past 30+ years.

I voted Green, largely because I'd like to see their concerns get more prominence in the political process. Were they ever to have a shot at real power, I might have to pay attention to whether they were competent to run anything, but for the forseeable future there appears little danger of that. So I have the luxury of choosing how to waste my vote without giving it a lot of serious consideration. Really, my opinion on the Canadian election has only slightly more significance than my opinion on the American presidential election, and quite honestly theirs is both more entertaining (who have we got to compare with the Hockey Mom from Alaska?), and the outcome is likely to affect my life almost as much.

....that lawns were evil. They require vast quantities of fresh water to keep them green in summer, regular applications of insecticides to keep bugs from munching out on them (it's a frackin' monoculture, duh -- pests love a monoculture), and more applications of herbicides to keep Mother Nature from turning it into, well, not a monoculture any more. (You've heard that Nature abhors a vacuum? It's a lie: the universe is pretty much all high-grade vacuum, but biological monocultures don't last long without a lot of effort.) Then there's the mowing, usually with some stinky two-cycle engine that puts out as much smog as a badly-tuned city bus.

And unlike the other grass monocultures we humans go to great trouble to maintain, lawns don't even feed hungry people. Mostly, they feed the status-conciousness of insecure suburbanites, and the bank accounts of the lawncare companies who do the heavy lifting required to keep our homes surrounded by a surface that resembles a billiards table. What the hell use are they? Approximately none.

And now my long-standing contention on the turpitude of turf is confirmed: in Beacon Woods, Florida, you can go to jail for not keeping your lawn green. It seems that retiree Joseph Prudente had the bad luck that his sprinkler system broke and his lawn died. So the local Home-Owners Association invoked a local deed covenant, requiring him to re-sod his property. Which he couldn't afford to do. So they got a court order telling him to do it. Since that didn't magically make him able to afford it, he still didn't. So on Friday he reported to the county jail, apparently to remain there until he sods his lawn. (One hopes that other residents of the county will send the bill for his incarceration to the Beacon Woods Civic Association, as a hint that the justice/penal system has more important issues than brown grass to deal with.)

It has been said that, in America, it is a crime to be poor. In Beacon Woods, FL, it's apparently even a crime to be not quite as solvent as your stuffed-shirt superficial middle-class neighbours. But the real crime here is having a rule like that in the first place. Look, morons: if the grass dies because the sprinkler system broke, then you obviously have completely the wrong conditions to be even trying to grow the stuff. Get a fracking clue, will you? Grow some native Florida vegetation or something.

(For the record: we have been steadily finding other things to fill the yard with besides grass. What lawn remains includes a mix of spring bluebells, feral violets and clover. Much healthier -- and much better-looking, too).
Posted by Eamon Knight at 10:38 PM 1 comment:

Labels: environment, pompous asses, stupidity
Newer Posts Older Posts Home
Subscribe to: Posts (Atom)
[Freethinkers are] a motley mob of deists, agnostics, secular humanists, pantheists, atheists, and who knows what else, and organizing seems to be against our nature. We have to resist that; we have to be willing to work together while recognizing the diversity of perspectives under the umbrella of freethought, and treat that variety as a strength rather than a weakness.
--P.Z Myers