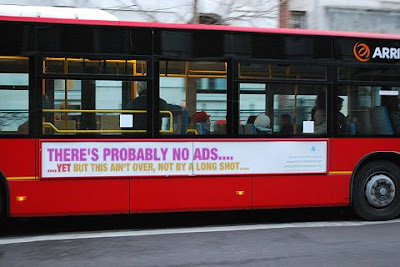 Everyone knows the back story by now: OC Transpo has turned down the "Probably No God" bus-side ads, justifying this decision by a series of prevarications. As it stands, Ottawa busses can carry ads for the evangelistic Alpha Course, the Anglican Diocese, pro-life pregnancy counselling services, and (appearing soon) random capsule Bible lessons. But suggesting there's no God? That might offend people! Nooooooo!

So, the issue went before the city's Transit Committee today -- and actually made the tag end of the six o'clock news. After some nice pics and a sound-bite from some of my fellow Ottawa Humanists, we got committee chair Alex Cullen:

To say that this particular group cannot speak -- if you follow the logic -- means that no Christian can speak, no Muslim can speak, no Hindu can speak, no Jew can speak, because these are all....[interruption by another committee member]

Cullen gets it (and so, to his credit, does the guy running the Bus Stop Bible Studies): If "viewpoint" advertising is allowed at all, then everyone gets their shot at it. If Cullen ever runs for mayor, I'm voting for him (unless of course the other Alex runs again).

Then, cut to Councillor Marianne Wilkinson (whom I believe was the interruptor):

I think that to actually demean religions groups in this city is not what we should be doing at OC Transpo, so I can't support this and I think that you were wrong Mr. Chair that it doesn't do that, because to me as a Christian it does... 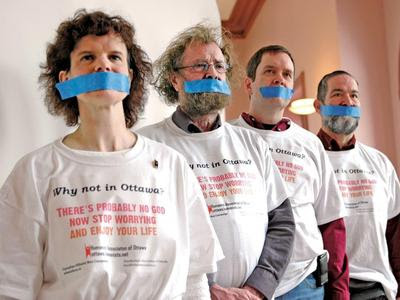 Did you see the CBC TV news report tonight about the Humanists Association of Ottawa's appearance at the Transportation Committee? Alex Cullen went to bat for them, but his motion to overturn OC Transpo's decision was tied, and therefore effectively defeated. I was so impressed, I sent a note of thanks to him. In the same report, there was a clip of Marianne Wilkinson slagging atheists with the usual faux offense gambit. I was tempted to send her a piece of my mind, but I've decided not to, at least until I can think of a way to try to convince her how wrong her attitude is. I expect it would be a waste of my time, though. She may just have prodded me enough to send a campaign contribution to one of her opponents next time, though.

bPer: I see this post got posted before I thought it did ;-) I only just posted it the final draft, but apparently some part of it was already up.
(You have to be careful what buttons you push on Blogger, and the timestamps are misleading unless I deliberately set it before I post)

Sorry to steal your thunder, EK. When I saw your post, it was just the picture.

I've heard back from Councillor Cullen. He thanked me for my support and said that he'd be bringing the matter before City Council on March 11th. He asked me to pass on my views to the other councillors - something I think we all should do.

So now I've got to figure out what to say to them. I'm not sure what I should say to Wilkinson, Bloess and Thompson (the ones who voted against the motion yesterday). At least we've got some time to prepare.

Do you think there'd be any chance to get the HAO and the FAC to start a letter-writing campaign?

bPer: There will be information about a letter writing campaign (including suggestions and example letters), and also an on-line petition. More details coming soon (hopefully by the end of the weekend).

I'm pretty sure I've also seen some sorta 'Go to church' ad on one of the buses, too--tho' I guess it might have been one of those mentioned in the article--I didn't really pay much attention to it.

Could make a point, there: offer to run a 'Don't go to church' ad. So re they cool with that, huh?

I'm a bit embarrassed to be an Ottawan, this morning.

I'm now trying to decide if I should be cheered or depressed by the current results of that CFRA poll (currently running a bit in favour of the 'free speech' option, at least...)

One the one hand, yes, sanity seems to be winning...

On the other, it's really not by winning by much. What is *wrong* with these people...

On the third hand I don't have, it *is* a poll of people who presumably listen to CFRA...

So I guess I'm undecided.

On the other, it's really not by winning by much. What is *wrong* with these people...

Yeah, and I think of all the times in Pharyngula comments I've boasted what an enlightened part of the world I live in. But it's encouraging how many on the religious side also "get" it.

On the third hand I don't have, it *is* a poll of people who presumably listen to CFRA...

I think the term you're looking for is "gripping hand", unless you have an aversion to Niven & Pournelle (for which I wouldn't blame you in the least).

And the "Go to church" ads: that's probably "cometochurch.ca", which is the local Anglicans (and were for the most part cute and clever).

I must admit that I have always thought that the wording of the message (for the proposed bus ad) is deeply flawed.

Don't get me wrong, I DO support the effort overall, and I cannot understand why SOME religious messages are to be allowed, while others are not. That is simply unconstitutional!

Having said that, I do take exception to the wording itself. (Though I DID like 'THE OTHER' message sometimes put up: "You can be good without God.")

In my never-humble-opinion, it would have been much more constructive (and much more difficult to oppose) if the message said something along the sentiment of:

"If there can be one God, there are likely to be many! Please, think about it..." (Yes, my wording is poor, but I mean the sentiment...)

Or, simply a message saying:

"The Goddess blesses every you every time you smile!" - accompany this with a picture of an innocently smiling child holding a flower....

These messages would probably have a similar effect, but would be much harder to attack (especially the condescending one about the Goddess blessing them), because every attack would expose the bigotry necessarily inherent in theism - and those currently opposing the ads.