....and one grandstanding git.

It's been a very biological week here. 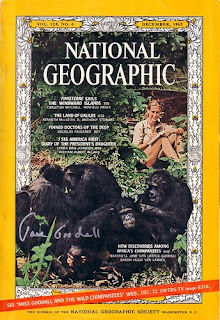 On Wednesday night, Jane Goodall spoke to a packed Centrepointe Theatre. I remember stories about Goodall in National Geographic, back in the 1960s, but sort of lost track after that. Her talk was largely autobiographical, covering the period from her childhood to the Gombe years. She told one amusing anecdote about how, at the age of about five, she hid in the hen house so she could see for herself that, yes, that big egg really did come out of the chicken. She also talked about the formation of the Root and Shoots program, which attempts to bring together conservation and development concerns, so that there is not a continual confict between the two. 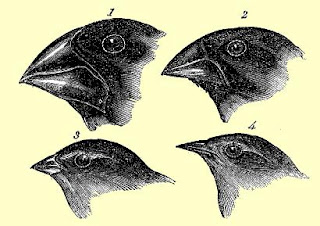 Tonight was Peter and Rosemary Grant at Carleton, giving the final Darwin Week lecture (if it seems this is a little late for Darwin Week, that's because the Grants spend February in the field. I can see how the Galapagos is probably preferable to Ottawa in February). Their talk centred on mechanisms of speciation and adaptation in their study of Darwin's finches on Daphne Major and Genovesa.

The Galapagos finches are famed for their wide variety of beak shapes and sizes, each adapted for exploiting a particular food source in the sparse environment of the islands. Peter Grant talked a little about two genes (bmp4 and CaM, if I recall the names) that control respectively, beak length and thickness. Then he talked about how rainfall variation from year to year affected average beak morphology among two smaller finch species Geospiza fortis and G. scandens, by affecting the abundance of their preferred seeds.

Rosemary took over to talk about hybridization and genetic diversity. G. fortis and G. scandens differ in beak size, but are otherwise fairly similar. Though hybridization is possible, they are mostly kept separate by mating preference, which is based partly on morphology, but even more on having different songs. Now here's the fun part: the song an individual finch will sing throughout its life is learned as a nestling, from its father (when asked just now whether this constitutes cultural inheritance, our household social anthropologist looked very thoughtful, but refused to commit himself on the question). Female finches mate only with males that sing the right song. However, once in a while a nestling will imprint on the wrong species' song. When it grows up, it will most likely mate with the other species, producing hybrid offspring having an intermediate beak size.

Field surveys show that hybrids are just as fit as either parent species. So what keeps fortis and scandens from merging into one species? Answer: the fact that a hybrid will only backcross to the parent species that sings its father's song. However, even this small amount of gene-flow helps to maintain genetic diversity within each species.

It was a great talk -- straight-up science from the people who did the work. Stuff you had to pay attention to. Unfortunately, just as Rosemary Grant got down to the last few slides, the fire alarm went off, and the Q&A had to be adjourned to the courtyard . Which brings us to..... Before the talk started, we noticed an old acquaintance sitting a few rows back -- Jonathan Cucan, from CORE. After the evacuation we were all just standing around outside (fortunately, it was a pleasant night), he made a bee-line for Peter Grant, so I hung back within earshot. I didn't catch everything that was said (let alone remember even that much), but the exchange went something like this:

Cucan said polite things about the Grants' talk, then asked whether "he agreed with Dr. Einstein and Dr. Hoyle" about the complexity of the cell (or something along those lines -- Johnny's current schtick seems to be about biochemistry). When Dr. Grant worked with these marvelous organisms, didn't he see the hand of God? Grant shook his head, no he didn't, and went into an explanation about molecular biologists having theories which they are testing of how to form DNA and cell membranes etc, and gradually build up complexity. Cucan came back that "Dr. Hoyle" had proved that it was impossible to form a cell spontaneously....at this point, one of the organizers came to Grant's rescue and pointed out that other people probably wanted a turn to talk. Cucan left, no doubt satisfied that he had successfully delivered his payload of weapons-grade sanctimony into the enemy's stronghold.

I must confess I was disappointed: I was sort of hoping Cucan would at least try to argue something relevant to Grant's talk (my Inner Creationist managed to think up a couple). But our boy Johnny has a bit of a one-track mind.

I do like how Cucan specifically used the full titles for Einstein and Hoyle -- like, waving around a doctorate is supposed to impress someone who has one themselves. And a GIGO calculation by an astronomer (several decades ago, IIRC?) is supposed trump actual experts working on that specific problem? Pack it up, folks -- Fred Hoyle has spoken, and Johnny Cucan is his prophet! A lovely case study in creationist's slavish devotion to intellectual authority.
Posted by Eamon Knight at 11:00 PM