Phil Plait has written a much, much better review of the new Star Trek movie (complete with astronomical notes), so go read his instead.

You're still here? *sigh* Let's see what I can come up with. First, the obligatory warning: 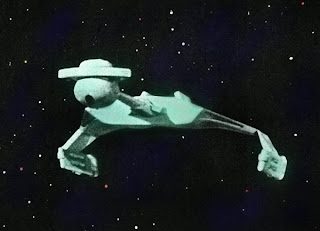 SPOILERS OFF THE STARBOARD BOW!

What, still here? OK, you asked for it:

The Kirk character has a heavy whiff of Mary Sue about him -- what, from obnoxious, know-it-all cadet to captain of the Enterprise, just for saving Earth from destruction once? Methinks he skipped about four ranks (and at least one more saving-everyone's-ass) there. Pity, too: it might have made the (inevitable) sequels more interesting to see him work his way up from Ensign through Lieutenant and Commander, before he gets to kick people out of the Big Chair whenever he wants to.

Several of the supporting characters seem to be played for comedy -- caricatures, really, of their older counterparts on classic Trek (not that that cast didn't descend, at times, into self-parody, especially by the fourth or fifth movie).

I'm also not entirely sure I approve of destroying Vulcan. I kept expecting them to fix the time-line and put everything back the way it was, allowing history to proceed along Canonical lines -- it was fairly late in the movie when I realized that, no, this is the new normal. Of course, Spock Prime knows about the supernova, giving them over a century to prepare to save Romulus (and thereby the villain's wife, Kirk's dad, Vulcan, and Spock's mom). Or as a commenter at Bad Astronomy pointed out: Nero the Romulan could have done the same thing, instead of going off on his mission of vengeance.

I think time travel and its associated paradoxes will always be a dramatic weakness. Back to the Future managed it, but only as comedy (and of course, Doctor Who -- another show that has never taken itself seriously, in either of its incarnations).

But enough kvetching: as a dying Kirk says, "It was fun". Enjoyably demented villain, plot that keeps moving along, plenty of fights and swashbuckling, some kick-ass space hardware and lots of explosions. The retro-industrial look of the Enterprise engine room looks more back to the Enterprise TV series than forward to either classic or Next Generation Trek. The Onion review (no, really!) gets it about right: "A fun and watchable action-packed thrill-ride".
Posted by Eamon Knight at 6:48 PM