Jeffrey Shallit brings to our attention that, over at Uncommon Descent, Denyse O'Leary is most upset that someone has put up, in her Toronto neighbourhood, posters advertising a movie critical of Intelligent Design. And these posters weren't put up by just anyone (like say, the staff of the cinema?). No: it was "Darwin's brownshirts".

As it happens, I visit my native city a couple of times per year. One thing I notice is that the downtown is just about wallpapered in posters advertising....well, nearly everything: upcoming nightclub acts, community yard sales, lecture series, art shows, guitar lessons, you name it. The surface of every power pole (where they can be seen) is almost solid with the rusty staples of posters long since torn down or weathered away. 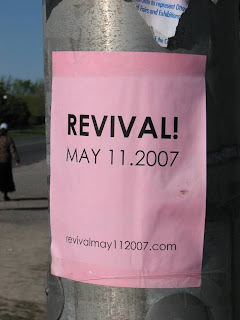 Of course, Toronto Darwinazis aren't the only ones postering. At right is a sample of a poster that went up around my suburban neighbourhood last week, advertising a Christian rock concert being held at a local church. Would this be the local Evangelical brownshirts? Or maybe pinkshirts (nah -- that would be too gay). As O'Leary suggests, maybe they're not popular enough to afford "regular advertising" either.

As it happens, I don't object to this event (other than my general antipathy to evangelical religion), though I do wish they would send the postering brigade back out to remove the damn things.

The point of all this rambling is: Yes, the poster plague is a bit of an eyesore, and quite possibly illegal in some towns (albeit difficult to enforce) -- but I find it, um, remarkable that O'Leary chooses to protest this poster, as if it were the first time anyone had put one up in her neighbourhood. Methinks she doth protest too much.

Ah, Hell, Eamon; you know that Evangelicals need to feel persecuted in order to fulfill the prophecies. If they are minor, the persecutions must still be manufactured. I am not sure about in Canada, but the cool thing now is to be a persecuted college student and get a law named after ya for Academic Freedom not to hear creationism ridiculed.