According to a report today on the BBC website, the English Channel was formed when a glacial lake breached a ridge across the present-day Straits of Dover, and rapidly drained through the gap, carving a deep, wide channel. This happened at least 200,000 years ago. (A similar process probably formed the "channelled scablands" of Washington state). 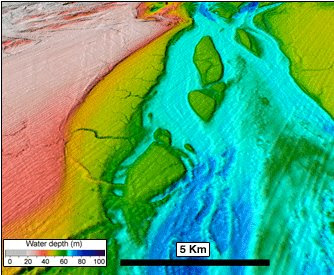 Of course, whenever you have reports of a lot of water happening all at once, certain people prick up their ears, and take it as confirmation of their favorite myth. Wait for it:....three....two....OK, they beat me to it by several months. From the Creation Research site:

This research adds to the abundant evidence all over the earth of catastrophic processes, and it reminds us that massive geological changes do not need big time - they need big process. The movement of large masses of water can account for many landforms we now see on earth....

Apparently this is old news (I'm not sure why the Beeb picked it up only today). I'm also not sure why the creationists think this supports their idea of Noah's Flood. (OK I lied: I have a shrewd guess why in the psychological sense. I just don't know why in the rational sense). There's a straw man being set up here: that "evolutionist" geology tossed out "Biblical" catastrophism around 1830 (presumably when Lyell published Principles of Geology), and it's been all about "atheist" uniformitarianism since.

However, if anything findings like this militate against their position. A catastrophic event at a particular place is not evidence that there was a world-wide catastrophe -- indeed, if the catastrophe was global, we should expect to see that sort of topography everywhere. The fact that we can recognize certain places as being "unusual" tells us that something unusual but localized happened there.

Moreover, the standard rhetoric as I have heard it, is that the "evolutionists' uniformitarian assumptions" rules out catastrophic explanations -- and yet here is a scientist advancing a catastrophic scenario, and having it accepted (at least as respectable, if not definitively proven). The fact is that science has no a priori objection to catastrophes -- as long as there is evidence for them. So much for creationist claims about presuppositions.

So, much as creationist like to make out these stories as being something radical and paradigm-overturning, the fact is: sometimes geophysical processes happen fast, and sometimes they happen slowly, and competent geologists (ie, who don't have a pre-determined conclusion to support) actually are smart enough to tell the difference. And guess what? Virtually all the world's geologists (the only exceptions of which I'm aware being fundamentalist Christians) find ample evidence that the earth is ancient, and no evidence of a global inundation in the past half-billion years.
Posted by Eamon Knight at 8:40 PM