Confessions of an Arachnophobe

I admit it: I'm not fond of arachnids (or indeed, "bugs" in general). And the degree of my aversion is roughly proportional to the size of the bug. However, that doesn't keep me from appreciating these animals scientifically, for their role in the ecosystem, and even for their occasional bizarre beauty -- like this gal(?) we found hanging from the vent on the side of our trailer, in central Iowa a few weeks ago. 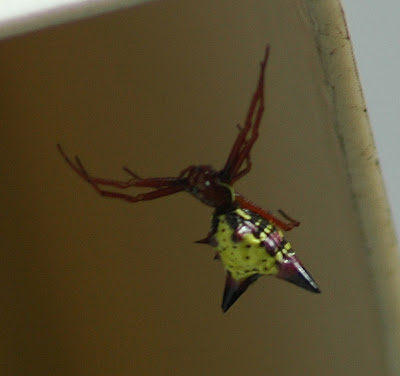 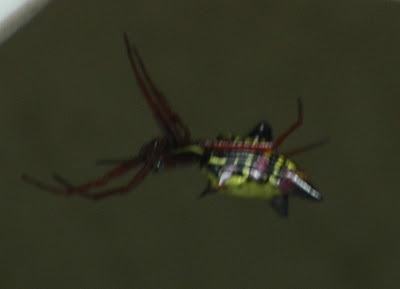 I apologize for the fuzziness of the photos. I don't own a macro lens, so these were taken with a telephoto, then cropped and blown up in GIMP (the real size of the body is maybe 10mm). For much better images, see the BugGuide site, which (along with hints from Spiderzrule) allowed me to identify this as Micrathena sagittata.

Genus Micrathena belongs to the orb-weaving spiders, which are ubiquitous. The bite is not considered dangerous.

When I first saw this critter I was quite startled -- it's easily the most bizarre spider I've ever seen outside of a zoo. I thought bugs like this only existed in the tropics. Turns out, no: it's fairly widely distributed in the central and eastern US.
Posted by Eamon Knight at 12:36 AM

That's an impressive spider, and I don't blame you for deciding to use a telescopic lens - implying that you were wisely keeping your distance while taking the picture!

Thanks as well for drawing my attention to the reality that undermines the humor of my parody! I've commented further on the subject very briefly at http://exploringourmatrix.blogspot.com/2007/10/when-reality-mirrors-parody.html

Thanks for visiting my blog!