Odetta was late for her set, having been delayed by "a dental emergency". About 4pm Saturday she was brought on-stage in a wheelchair, and received an instant standing ovation: 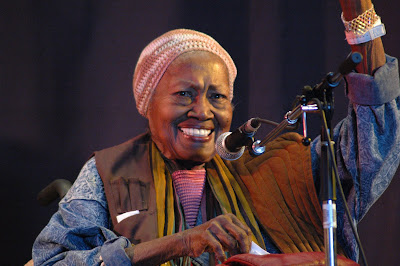 Born in Alabama in 1930, Odetta trained initially as a classical and operatic performer, but then turned to folk music. She was dubbed "The Voice of the Civil Rights Movement" and is credited with influencing dozens of musicians of the 60's and later. For us, she gave a solid performance of good old folk, blues and spirituals. 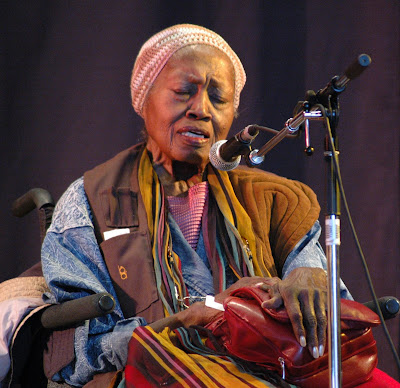 Two points to note about the picture below, which I snapped as Odetta was being brought on stage. First: The guy on the left in the red shirt is Tao Rodriguez-Seeger, grandson of the famous Pete Seeger -- another musical friend of Odetta from the old days (more on Tao in a later post). Second: Note the woman who is wheeling Odetta, and getting her set up -- what is her skin colour? Now reflect that, when Odetta was born, and for the first several decades of her life, it would have been unthinkable (certainly in the Southern US, maybe even up here) for an elderly black woman to have a white attendant. 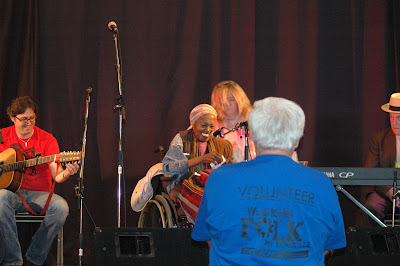 How far we have come. And Odetta was among those who helped make that change.
Posted by Eamon Knight at 11:04 PM