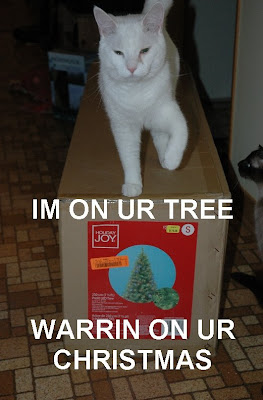 That's my slightly stupid friend Bertrand Alfred Russell Wallace North Whitehead Insufficient Delta-Vee (but everyone just calls him Russell), and he is the latest Warrior Against Christmas.

The other day, our humans decided they wanted to put up a tree. Since they didn't have one, they went out in the car (Yikes. How can anyone stand being in those things?) and came home with a box. As soon as they got the tree out of the box, Russell decided it had a flavour and started with the noms. The humans didn't like that, so they put the tree back in the box, and put the box back in the car. So: no Christmas tree. Which means no decorations to play with.

Stupid Russell. You're supposed to wait until they aren't looking.

Oh well. I still have my favorite Christmas song. (Can you guess why? Anyone? AJ?)

Posted by Kizhe the Couch Czar at 8:25 PM

Let me first say that I truly admire your ability to type with such short, furry fingers. It must have taken hours to write that!

To address your question, I'll offer a guess. My guess is that, seeing as you were raised in a non-Christian (and non-human) family, the adoption of the Christmas myth took a different path than that of your neighbour Christian human offspring. The way things were expressed in the song more closely match your experience as you remember it than other songs. Well, that and in the galaxy of Christmas music, I think this is the only Yes song, and how can you do better than something by Yes?

Thanks for the compliment, bPer. I had help from my other catfriend, Ampersand. He is polydactyl, so has lots of extra fingers to contribute to the task.

As for your guess, you are close - The song is actually by Greg Lake of ELP, not Yes. (I often get them mixed up myself, and so does Theo, much to Eamon's dismay.) But I'll give you another clue: the reason I like it is actually because of the instrumental refrain.

Doh! Of course it's Greg Lake. And thanks to you, bad kitty, it's been rolling around in my head all day, now.

Oh, forgot my next guess - your human masters have belled you so often that you've come to like hearing them?