It's that time of year again. I mean of course, the season when we wish each other good cheer and good fortune...in ways which seem to be increasingly fraught with anxiety for some people. There's so many choices of occasion to observe: Christmas, Solstice, New Year, Chanukah, Kwanzaa...what to say?

Now personally, I don't much care what people wish me. Christmas as it has come down to us is a syncretistic mish-mash of ancient European pagan winter solstice rites, Christian legends about the Nativity and Saint Nicholas, heavy overlays of Victorian sentimentalism, hours of music of highly variable quality, and a good helping of modern commercial consumerism. If you want an excuse to party this time of year, there's plenty in there to pick from. Thus my agnostic family-of-origin celebrated a basic Western-cultural sort of Christmas with a tree, presents (whether they came from Santa or Mom and Dad was often somewhat ambiguous), carols on the stereo, and a big dinner with friends. I have happy memories of all that, and tried to give my kids some of the same.

So: "Merry Christmas" works for me, both personally and with respect to my ancestral culture. "Happy Chanukah" picks up my wife's ancestry, so that's good too. But in the unlikely event someone wishes me "Happy Kwanzaa", I won't know what's expected of me (aside from a non-plussed "Um...sure...and the same to you"). I won't be offended (it's too small a thing to get worked up over, and presumably the speaker means well), but I really won't understand what I've been wished. If I respond in kind, am I comitting myself to something? It would feel socially awkward. So it would seem, at the least, courtesy to bestow good wishes in the name of a festival the recipient actually celebrates -- in much the same way as you try to pronounce their names correctly.

Now imagine you're an overworked, underpaid retail employee trying to be polite to (frequently obnoxious) customers during the busiest time of the year. And as part of that you're required negotiate the mine-field of cultural sensitivities contained in an apparently simple greeting. Some stores try to finesse this by mandating the generic "Happy Holidays", but somehow it doesn't have the same ring to it. If only you could read minds....

....and someone has come up with what, at first sight, seems like an

excellent idea: sell little buttons bearing the reassuring message "It's OK: Wish Me A Merry Christmas". I like it: it cues the poor store clerk on your preferred salutation, in a light, friendly way. I can see a whole line of these, for Chanukah, Kwanzaa, Solstice, etc, etc. It could be great ecumenical outpouring of mutual respect and understanding! Peace on earth and goodwill to men! Why, one might almost say that it's, well, very much in the spirit of Christmas....

....until you go read the rest of the website. "Happy Holidays"? Did you think it was just a way to be culturally inclusive? (Or even, just a convenient abbreviation signifying Christmas, New Year, and the week in between?) Guess again: it's the "....forces of darkness that are attempting to silence the good news...." (cue scarey music). And I bet you thought "Merry Christmas" was just a customary way of expressing hope that the recipient's last week or so of the year would be a safe and happy experience of spending time with family, attending congenial social gatherings, relaxing at home, and maybe getting some cool new toys, right? Nope. What you're really doing is "....telling them that there is good news and that the God of the universe has put into motion a wonderful plan to offer them salvation...[It] is indeed nothing less than the first step in opening a door to offer someone salvation." Well, golly: all that time when I was growing up godless, I never realized I was actually preaching the occasional Gospel sermon all through December. Who knew?

Of course, no good evangelistic crusade would be complete without a little Shoppin' For Jesus:

[Wearing the button] tells people you are not just shopping for a winter festival, but what you are buying is celebrating your Lord’s birth.

Which irresistibly reminds me of this fleeting shot from Terry Gilliam's dark comedy Brazil: 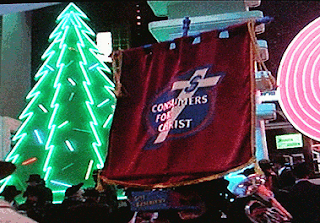 Seriously, shopping as sacrament? Only in America.... Whereas Jesus cast the money-changers out of the temple, these folks want to bring the temple in to the shopping mall -- Baptisms in the Jacuzzi store? Men's Bible Study in Home Depot; Women's in the Kitchen & Bath department? (For lulz, check out the joy on the "Kudos" page, in honour of adverts for the "Christmas Super Saturday sale" and other great proclamations of faith).

And, Mr. Merchant, if you dare wish us "Happy Holidays", we will be offended (PDF), offended I say! Because the phrase "Merry Christmas" is very very special, and the organizers of this campaign want everyone saying it to each other, all the time (but especially in stores):

As the cycle of wishing and being wished a “Merry Christmas” begins, the forces of darkness in our nation will be affected. Light will be proclaimed. Hope will be announced, and the spiritual atmosphere will be changed.

Kind of like Harry Potter casting a spell, only you don't need to wave a wand to make the magic happen.

Like I say, on the whole I don't care how people choose to express good wishes to me. But if I get the feeling that there's more going on than a simple exchange of human goodwill, that there's an agenda being pushed, I am....inclined to push back. So on the off chance that someone wearing one of those buttons walks up to me, says "Merry Christmas", and stands there expectantly, I shall be very tempted to paste on my biggest smile, and reply in my loudest, cheerfullest voice:

...because some people really, really need to get over themselves.

Or, y'know, you could stare coldly at 'em, and say somethin' like 'Listen, punk, we both know you stole this here holiday fer your rewarmed, derivative, Johnny-come-lately cult in the first place anyway--so if you'll not drink the ritual toasts to Odin, Njörðr, and Freyr with me, you'd best just can that Merry Christmas bullshit of yours and quietly be on yer way...'

(/Heads off to find a 'The axial tilt is the reason for the season' button...)