How We Are Celebrating the Season

My grown sons showed up last weekend, along with the partner of the older one and a college

buddy of the younger one. So we spent a couple of evenings playing Dungeons & Dragons.

'Cuz hacking through a cavern full of kobolds with edged weapons is such a great, family-friendly activity, no? 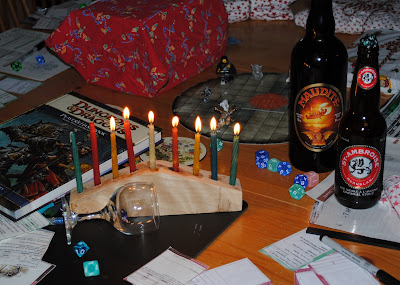 So like, Happy (belated) Chanukah, eh?
Posted by Eamon Knight at 4:25 PM