BEHOLD:
* but some years before

DO YOU KNOW WHAT THAT PROVES?

b) Humans are exceptionally talented at finding patterns, even when there aren't any.


For more evidence (of what, I'm not sure), check out these videos:

A floor drain stain that looks vaguely like a large, wide woman with a cloak

and, the pig that lives in my bathroom door: 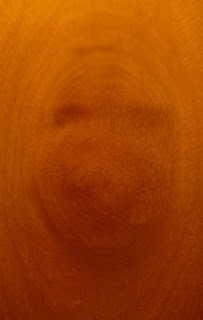 hat tip and a chocolate chip to Greg Laden
Posted by Theo Bromine at 5:40 PM

That doesn't look at all like the orange Jesus I recall from living in college rez....

Aw, geez, Eamon, let's not go there. For us (Queens rez), it was "Purple Jesus" and "Orange Christ". Whatever you called it, it was a recipe for much stupidity followed by pain.

Theo, your door panel pig looks more like a seal to me, but it may just be the picture. Maybe bathrooms are special this way - our main bathroom has a tile floor whose tiles have a random pattern. I've found countless figures, faces, animals, etc. in the patterns while, ahem, sitting there. What I've found most interesting about it is that it depends on the angle too - I'd gaze over to the tiles by the door and see something, but when I'd try to find the same pattern in an identical tile nearer, I couldn't see it. Being an amateur astronomer practiced at mentally rotating and/or flipping patterns in my mind, I found this puzzling.

Wait, you mean there are examples of things that aren't indicative of a more fundamental, all-meaningful pattern? What a downer...