PZed Myers comes to TO

TO is also known as Toronto, Ontario (Canada), and not to be confused with t.o aka usenet newsgroup talk.origins, (where I had my first encounter with PZed, known to some as PZ, some mumblety many years ago).

PZed's Toronto talk was sponsored by the Centre for Inquiry, Ontario. Co-opting the gourd carving meme from the local religious observance, the CFI displayed a cephalopumpkin*:

- possibly a flower, or a ghost with a belly-button, but I interpret it as a curcurbit representation of electron orbits around the atomic nucleus.

On to the talk - an overview of various aspects of the conflict between religion and science education
. 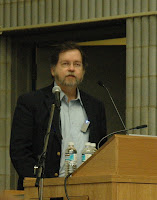 Though some have commented that PZed was preaching to the choir, so to speak, everyone was very surprised to see Ken Ham in attendance! Here's a picture of Ken at the pub asking Jesus (who was just hanging around at the bar) to sign a copy of the book He wrote.

The symposium (original Greek usage) following the meeting continued for some time after Eamon and I wimped out.

* not to be confused with a punkin-head
Posted by Theo Bromine at 10:35 PM

Nice to see you and Eamon last Friday. It was quite the night, wasn't it?

Thanks for the gentle prod to join the CFI after the get-together with Prof. Myers and Prof. Moran. As I told you then, I had hemmed and hawed about doing so, and had decided not to for a frankly ridiculous reason. I'm glad you caused me to reconsider and do the right thing. At the CFI reception, I got the same feeling I get at RASC meetings - being among like-minded people for a change. I have to put my money where my mouth is and support such groups.

Glad to see someone got a shot of him. I doubt I'll ever see anyone dress up like him ever again.

Here's my image of Ken Ham and Jesus Christ.

I've not posted my images from the lecture & pub yet. What if people don't want to be have their picture posted?

Re publishing pictures: If I obviously (ie not surreptitiously) take a picture (in a social setting), I am going to assume that people will let me know at the time if they would object to the picture being posted. For public speakers, performers or officials, I assume posting pictures is fair game even if they are not aware that they were photographed. (Though if my photo depicts something very embarrassing, or is of a child, I would be inclined to ask permission first.)

On the other hand, I am rather more circumspect about posting real names (including mine :)