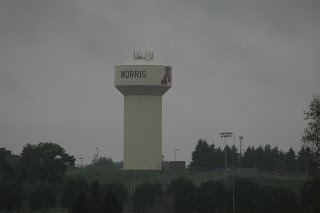 Morris, Minnesota: a sleepy (and seemingly typical) little prairie town -- a row of grain elevators by the train tracks, a one-screen cinema that has seen better days, a brick-front main street featuring a coffee shop, hardware and farm implement dealer, the town hall, etc. But reliable intelligence told us that this little town is harboring a secret, that it is the source of a baneful emanation that spreads far beyond its borders. It was to search out the source of this influence that we journeyed across fifteen hundred miles of blazingly hot asphalt, enduring moderate (by Canadian standards) gas prices, polite American customs agents, occasional mosquitoes, and filthy toilets in cheap campgrounds. 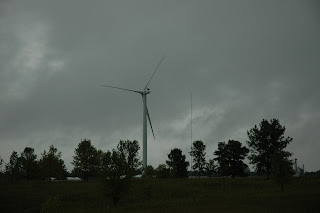 Our initial survey of the territory raised more questions than it answered: What is the meaning of "Biomass Conversion Facility"? This structure on the hill -- is it just a wind turbine? Or a cover for some more sinister purpose? What is the bone-chilling, teeth-gritting sound that emanates from the local cemetery at hourly intervals? 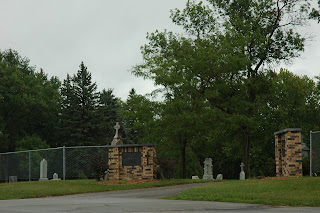 Why are there train tracks -- but never any trains? And why is the name of local "Potato Park" given in French? 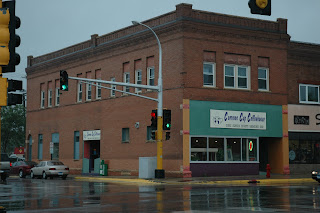 The first stop on our quest was this little coffee shop -- ostensibly run by a church, yet we had heard rumours of less holy goings-on. While we sipped our afternoon tea (BTW: what is it with American coffee shops and tea? Coffee may only require 180 degrees Funnyheit, but good tea requires boiling water. But I digress.) Theo found our first positive lead -- the signs of a shadowy local cabal known as the Pharyngulista. 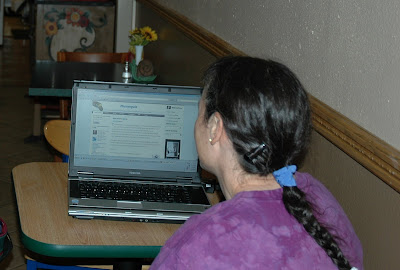 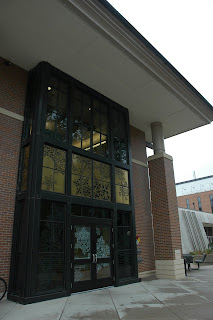 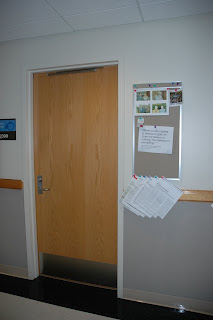 Indications were that the conspiracy centered on the science building at the local university. A search of the building led us to this locked door. There was (apparently) no one inside, but the posted pictures tell a tale -- in each one, the same man appears, in company with certain other individuals already known to us. We set out again to search the area for the mysterious individual known only by the code letters "PZ" -- the leader of the Pharyngulists!

A few minutes later, we spotted our quarry: the man in the pictures! Cautiously we approached, bearing what we hoped was a suitable tribute -- a libation prepared in an exotic land (Quebec), where they speak a language known only to the natives, bearing symbols indicating our sympathy with his cause. The cold, haughty eye (ie. the one not covered by the eye-patch) regarded us for a moment, then softened as he examined the bottles. "Your offering is acceptable. Come, you will dine with me".

Dinner conversation ranged from the weather to the quickest path to world domination. "Pinker gives too much credence to evolutionary psychology", PZ intoned, pulling a mewing kitten from a basket and biting its head off. "Oh don't worry", he said, noting my expression "These are rejects from the Biomass Project -- the fur clogged the piping, so we had to switch to a less hairy mammal". "You mean like naked mole rats, or porpoises?" I asked, wondering a bit anxiously which non-hairy mammal they were using. "No", replied PZ, "Porpoises have too much body fat, and the process works best with something around 60 kilograms. Frosh, for example, have proven quite suitable....By the way, is there something wrong with your dinner? You've barely touched it. This restaurant is usually excellent, but if the kitchen is slipping I shall have to order the chef".

"Um, order the chef to do what?" I inquired nervously.
"No, not to *do* anything" he said "I'll just order the chef. In a light wine sauce, I think"
I quickly assured him that the pasta was excellent, but pleaded a mild stomach upset brought on by enduring too many Culver's frozen custards along our journey through the Midwest (It was research, OK? I had to test all the flavours.)

After dinner, we were conducted into PZ's inner sanctum, where he permitted his likeness to be recorded, seated on the Octopus Throne. 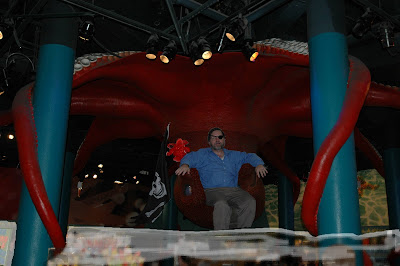 There we were introduced to the famed Trophy Wife, and served a lovely cup of tea at just the right temperature. Somewhat later, we took our leave - it would be an evening we would not soon forget.
Posted by Eamon Knight at 10:25 PM

Brilliant! And love the gloooomy photos of Morris too.

Thanks Mr. Knight.
I wondered what the home of the Evil Trolls looked like.
I've seen your name while lurking around the Humanists of Ottawa website ( I live near Smith's Falls).
Your blog is now on my favourites list.
Keep up the good work.
Oh yeah
Arrr Matey!

Hey, you guys are back! Yay! It's been too long since your last post. I was almost ready to write you off until I saw the post at Pharyngula.

Thanks for the other side of the story of your vist to Morris. Fun stuff!

Its a scary trip to meet the Master, but you shall have your reward when the Cephalopod Overlords come.